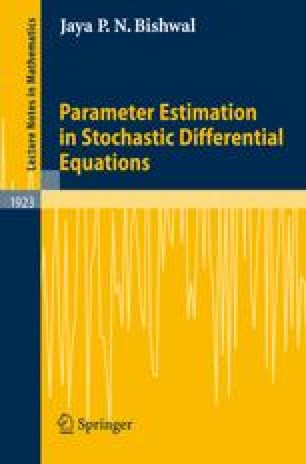 Stochastic differential equations (SDEs) are a natural choice to model the time evolution of dynamic systems which are subject to random influences (cf. Arnold (1974), Van Kampen (1981)). For example, in physics the dynamics of ions in superionic conductors are modelled via Langevin equations (cf. Dieterich et al. (1980)), and in engineering the dynamics of mechanical devices are described by differential equations under the influence of process noise as errors of measurement (cf. Gelb (1974)). Other applications are in biology (cf. Jennrich and Bright (1976)), medicine (cf. Jones (1984)), econometrics (cf. Bergstrom (1976, 1988)), finance (cf. Black and Scholes (1973)), geophysics (cf. Arato (1982)) and oceanography (cf. Adler et al. (1996)).

Asymptotic Normality Parametric Stochastic Drift Parameter Discrete Observation Approximate Likelihood
These keywords were added by machine and not by the authors. This process is experimental and the keywords may be updated as the learning algorithm improves.
This is a preview of subscription content, log in to check access.