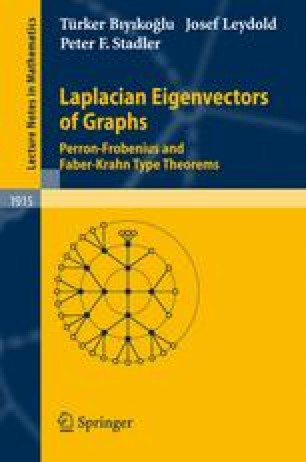 The foundations of spectral graph theory were laid in the fifties and sixties of the 20th century. The eigenvalues of graphs, most often defined as the eigenvalues of the adjacency matrix, have since then received much attention as a means of characterizing classes of graphs and for obtaining bounds on properties such as the diameter, girth, chromatic number, connectivity [14, 17, 45, 46, 83, 85]. The interest has since then shifted somewhat from the adjacency spectrum to the spectrum of the closely related graph Laplacian [14, 35, 41, 85, 88, 137, 139]. In particular, Laplacian graph spectra are being investigated as a means of characterizing large “small world networks” and random graphs, see e.g. [33, 34, 119] for a few examples. For the most part, the theory is still concerned with the eigenvalues.

Dirichlet Problem Adjacency Matrix Travel Salesman Problem Chromatic Number Small World Network
These keywords were added by machine and not by the authors. This process is experimental and the keywords may be updated as the learning algorithm improves.
This is a preview of subscription content, log in to check access.