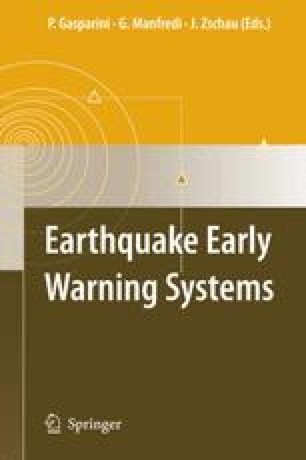 The necessary qualities for early warning systems may be summarized as follows:

UrEDAS, Urgent Earthquake Detection and Alarm System, is the first real-time P-wave alarm system in practical use in the world. It is able to process digitized waveforms step by step without storing the waveform data. As the amount of processing does not differ whether or not an earthquake occurs, system failure due to overload will not occur.

Here, the present condition of the P-wave early detection system UrEDAS is viewed under working conditions and the results of test observations where faults exist are also reported. Then a new real-time data processing system for new generation will be considered.

Warning System Early Warning System Initial Motion Alarm System Predominant Frequency
These keywords were added by machine and not by the authors. This process is experimental and the keywords may be updated as the learning algorithm improves.
This is a preview of subscription content, log in to check access.