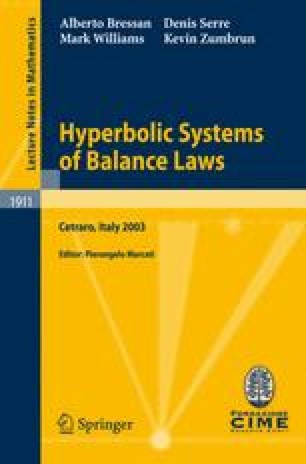 We present a streamlined account of recent developments in the stability theory for planar viscous shock waves, with an emphasis on applications to physical models with “real,” or partial viscosity. The main result is the establishment of necessary, or “weak”, and sufficient, or “strong”, conditions for nonlinear stability analogous to those established by Majda [M.1, M.2, M.3] in the inviscid case but (generically) separated by a codimension-one set in parameter space rather than an open set as in the inviscid case. The importance of codimension one is that transition between nonlinear stability and instability is thereby determined, lying on the boundary set between the open regions of strong stability and strong instability (the latter defined as failure of weak stability). Strong stability holds always for small-amplitude shocks of classical “Lax” type [PZ, FreS]; for large-amplitude shocks, however, strong instability may occur [ZS, Z.3].

Shock Wave Resolvent Equation Spectral Stability Branch Singularity Inviscid Case
These keywords were added by machine and not by the authors. This process is experimental and the keywords may be updated as the learning algorithm improves.
This is a preview of subscription content, log in to check access.