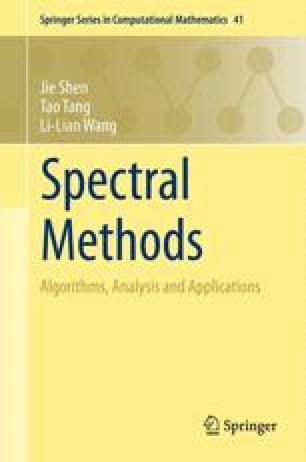 The spectral method was introduced in Orszag’s pioneer work on using Fourier series for simulating incompressible flows about four decades ago (cf. Orszag (1971)). The word “spectral” was probably originated from the fact that the Fourier series are the eigenfunctions of the Laplace operator with periodic boundary conditions. This fact and the availability of the fast Fourier transform (FFT) are two major reasons for the extensive applications of Fourier methods to problems with periodic boundary conditions. In practice, a variety of physical problems exhibit periodicity. For instance, some problems are geometrically and physically periodic, such as crystal structures and homogeneous turbulence. On the other hand, many problems of scientific interest, such as the interaction of solitary waves and homogeneous turbulence, can be modeled by PDEs with periodic boundary conditions. Furthermore, even if an original problem is not periodic, the periodicity may be induced by using coordinate transforms, such as polar, spherical and cylindrical coordinates. Indeed, there are numerous circumstances where the problems are periodic in one or two directions, and non-periodic in other directions. In such cases, it is natural to use Fourier series in the periodic directions and other types of spectral expansions, such as Legendre or Chebyshev polynomials, in the non-periodic directions (cf. Chap. 7).

Fast Fourier Transform Fourier Series Solitary Wave Periodic Boundary Condition Discrete Fourier Transform
These keywords were added by machine and not by the authors. This process is experimental and the keywords may be updated as the learning algorithm improves.
This is a preview of subscription content, log in to check access.