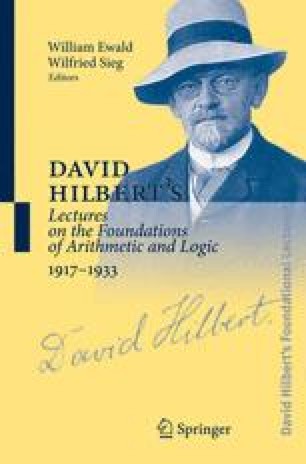 Lectures on the Principles of Mathematics

The following lectures, delivered during the Winter Semester 1917/18, are a pivotal event in the development of mathematical logic and mark the start of Hilbert1#x2019;s long and fruitful collaboration with Paul Bernays. Towards the end of his lectures on set theory in the preceding Summer Semester, Hilbert had stated (p. 146), 1#x2018;I hope to be able to explore a foundation for logic more deeply next semester1#x2019;.1 Those earlier lectures had been concerned with the mathematical articulation of set theory and with the prospects for a settheoretic reduction of mathematics. For Chapter IV of the set theory course, Hilbert had announced an enticing and enigmatic title: 1#x2018;Applications of Set Theory to Mathematical Logic1#x2019;. The lectures, however, did not reach the topic of logic proper, and give no hint of the approach Hilbert began exploring a few months later.