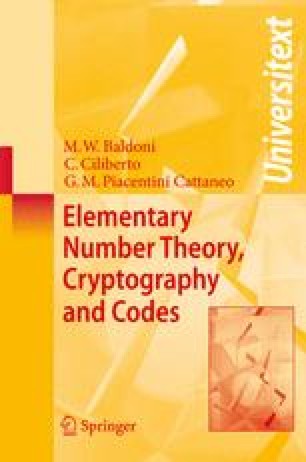 In this last chapter we shall have a look at the new frontier of cryptography, the quantum cryptography, which relies on ideas originating in quantum mechanics. On the one hand, quantum cryptography envisions the creation of a computer completely different and unprecedented with respect to classical computers, the so-called quantum computer. At present, it is only conceived as a theoretical possibility; but if it were actually developed, it would be able to perform in polynomial time some of the computations that a classical computer performs in exponential time. As we know, this would make all present cryptosystems, such as RSA, vulnerable, seriously jeopardising civil, military, financial security systems. The result could lead to the collapse of our very civilisation, which largely relies on such systems. On the other hand, the same ideas on which the notion of a quantum computer is based lead to new, completely unbreakable quantum cryptosystems, impervious even to an hypothetic quantum computer, and having further the surprising feature of discovering if an eavesdropper has attempted, even unsuccesfully, to intrude a private communication.

Quantum Mechanic Quantum Computer Quantum Channel Quantum Cryptography Receive Message
These keywords were added by machine and not by the authors. This process is experimental and the keywords may be updated as the learning algorithm improves.
This is a preview of subscription content, log in to check access.