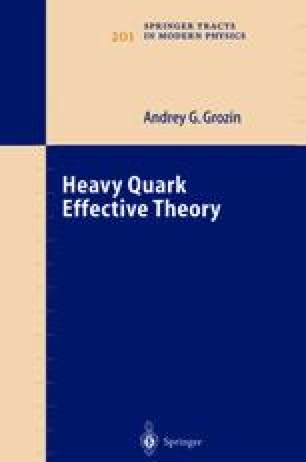 Hadrons with a Heavy Quark

The B meson is the hydrogen atom of quantum chromodynamics (QCD), the simplest non-trivial hadron. In the leading approximation, the b quark in it just sits at rest at the origin and creates a chromoelectric field. Light constituents (gluons, light quarks, and antiquarks) move in this external field. Their motion is relativistic; the number of gluons and light quark--antiquark pairs in this light cloud is undetermined and varying. Therefore, there are no reasons to expect that a non-relativistic potential quark model would describe the B meson well enough. Similarly, the \(\varLambda_{\text{b}}\) baryon can be called the helium atom of QCD. Unlike in atomic physics, where the hydrogen atom is much simpler than helium, the B and \(\varLambda_{\text{b}}\) are equally difficult. Both have a light cloud with a variable number of relativistic particles. The analogy with atomic physics can tell us a lot about hadrons with a heavy quark.