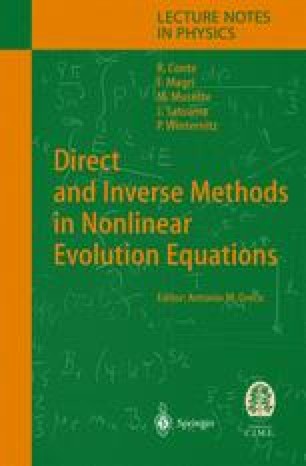 The method of Poisson pairs in the theory of nonlinear PDEs

The aim of these lectures is to show that the methods of classical Hamiltonian mechanics can be profitably used to solve certain classes of nonlinear partial differential equations. The prototype of these equations is the well-known Korteweg–de Vries (KdV) equation.

In these lectures we touch the following subjects:

i) the birth and the role of the method of Poisson pairs inside the theory of the KdV equation;

ii) the theoretical basis of the method of Poisson pairs;

iii) the Gel'fand–Zakharevich theory of integrable systems on bi-Hamiltonian manifolds;

iv) the Hamiltonian interpretation of the Sato picture of the KdV flows and of its linearization on an infinite–dimensional Grassmannian manifold.

v) the reduction technique(s) and its use to construct classes of solutions;

vi) the role of the technique of separation of variables in the study of the reduced systems;

Poisson Bracket Darboux Transformation Hamiltonian Vector Poisson Manifold mKdV Equation
These keywords were added by machine and not by the authors. This process is experimental and the keywords may be updated as the learning algorithm improves.

Work partially supported by the M.U.R.S.T. and the G.N.F.M. of the Italian C.N.R.