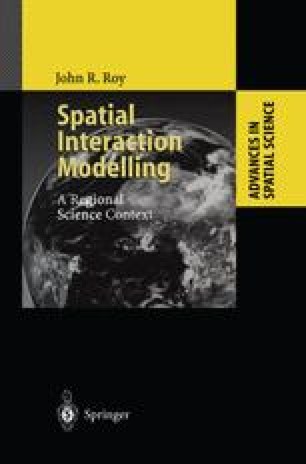 Strong anecdotal evidence exists throughout recorded history for the operation of a ‘gravity’ effect in human activities. This is illustrated by the paramount role of accessibility in location decisions. In ancient times, major cities concentrated in seaport locations or along large rivers to be more accessible to trade opportunities with other cities. Also, export and the associated transport of locally produced commodities usually only took place after local demand was satisfied (except when there was an intrinsic price or quality advantage). Also, when faster and more reliable transport modes such as rail were introduced, major railheads increased in relative importance compared with river ports. In fact, most large river ports made sure that they also became important railheads, with some goods being handled by rail and bulk commodities by river barge.

Gravity Model Base Period Spatial Interaction Spatial Interaction Model Trip Distribution
These keywords were added by machine and not by the authors. This process is experimental and the keywords may be updated as the learning algorithm improves.
This is a preview of subscription content, log in to check access.