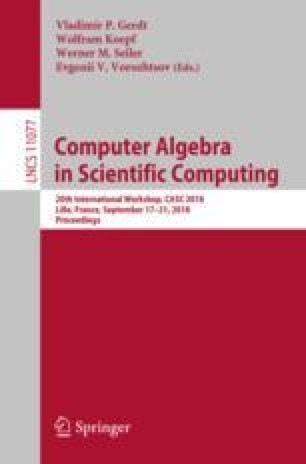 We discuss algorithms for pseudo-division and division with remainder of multivariate polynomials with sparse representation. This work is motivated by the computations of normal forms and pseudo-remainders with respect to regular chains. We report on the implementation of those algorithms with the BPAS library.

Algorithm 6 is a direct (or naïve) procedure for computing the pseudo-remainder and the pseudo-quotients of a polynomial \(a \in \mathbb {K}[x_1,\ldots ,x_m]\) by a triangular set \( T = \{ t_1, \ldots , t_N \}\). Note that T may not be zero-dimensional, that is, \(N < m\) may hold. Moreover, T may not be normalized; in particular its initials may not be constant. Algorithm 8 is a recursive version of Algorithm 6 following the same principles as Algorithm 7 and calling Algorithm 4 at Line 14.