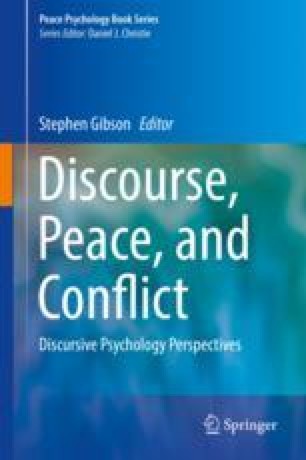 This chapter provides an introduction to the volume, and maps out some of the core conceptual and analytic principles of discursive psychology, whilst noting some of the debates and disagreements within the field, as well as providing an orientation to some of the foundational concerns of peace psychology. An initial sketch of the possibilities for a discursive peace psychology is set out through a brief illustrative analysis of an extract from a televised political debate concerning the 2003 invasion of Iraq. The chapter concludes by providing brief summary overviews of the remaining chapters in the book.

(1.0) The number in parentheses indicates a time gap to the nearest tenth of a second.

(.) A dot enclosed in parentheses indicates a pause in the talk of less than two-tenths of a second.

[ ] Square brackets between adjacent lines of concurrent speech indicate the onset and end of a spate of overlapping talk.

.hh A dot before an ‘h’ indicates speaker in-breath. The more h’s, the longer the in-breath.

hh An ‘h’ indicates an out-breath. The more h’s, the longer the breath.

- A dash indicates the sharp cut-off of the prior word or sound.

: Colons indicate that the speaker has stretched the preceding sound. The more the colons, the greater the extent of stretching.

! Exclamation marks are used to indicate an animated or emphatic tone.

° ° Degree signs are used to indicate that the talk they encompass is spoken noticeably quieter than the surrounding talk.

> < ‘More than’ and ‘less than’ signs indicate that the talk they encompass was produced noticeably quicker than the surrounding talk.