Thermodynamics in the Quantum Regime 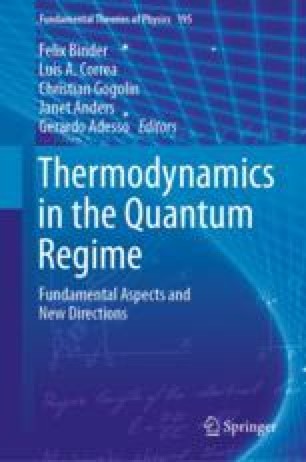 Thermodynamics in the Quantum Regime pp 959-981 | Cite as

This work was funded by Agence Nationale de la Recherche under the grant ANR-17-ERC2-0001-01. Part of the research reviewed in this chapter was made possible by the COST MP1209 network “Thermodynamics in the quantum regime”.

We describe here how one can determine the quantum state \(\rho _t\) in the experiment of Naghiloo et al. [9]. The signal V(t) carrying the information being continuous, one can decompose the information into time bins and get a time-resolved measurement. In order to observe non negligible effects of measurement backaction, it is crucial to minimize the amount of information that is lost between the cavity and the measurement apparatus, i.e. to maximize the quantum efficiency \(\eta \). This process is done using quantum-limited amplification right after the cavity, a process that adds the minimal amount of noise allowed by quantum mechanics [47]. In their quantum trajectories experiment, Naghiloo et al. use a Josephson Parametric Amplifier (JPA) [48] that amplifies one of the two quadratures of the field (equivalent to the position and momentum operators of a mechanical linear oscillator) and as such operates as a phase-sensitive amplifier allowing to reach a state of the art quantum efficiency of about \(\eta =30\%\). Denoting as \(\mathrm {d}t\) the time interval between two successive records, the measurement record at time t is given by \(\mathrm {d}V(t)=\sqrt{2\eta \Gamma _m}\langle \sigma _z\rangle _{\rho _t}\mathrm {d}t+\mathrm {d}\mathcal {W}_t\) where \(\mathrm {d}\mathcal {W}_t\) a zero-mean Wiener process whose variance is \(\mathrm {d}t\) and which represents the quantum and technical noise. Note that here the expectation value \(\langle \sigma _z\rangle _{\rho _t}=\mathrm {Tr}(\rho _t\sigma _z)\) depends on the particular realization of the trajectory and thus on the measurement record \(\{V(\tau )\}_{\tau }\) at all times \(\tau <t\). The density matrix of the qubit is then reconstructed using the Stochastic Master Equation (SME) [49]
$$\begin{aligned} {\mathrm {d}}\rho _{t}=-\mathrm {d}t\frac{i}{\hbar }[H,\rho _t]+\mathrm {d}t\frac{\Gamma _m}{2}\mathcal {D}[\sigma _z]\rho _t +\ \mathrm {d}\mathcal {W}_t\sqrt{2\eta \Gamma _m}\mathcal {M}[\sigma _z]\rho _t, \end{aligned}$$
(40.11)
where \(\mathcal {D}\) is the Lindblad super operator and \(\mathcal {M}\) the measurement super operator \(\mathcal {M}[c]\rho =\frac{1}{2}\big ((c)-\langle c\rangle )\rho +\rho (c^\dagger -\langle c^\dagger \rangle )\big )\). The two first terms correspond to a Lindbladian evolution of the qubit dephased by the measurement drive (for the seek of simplicity other decoherence channels as spontaneous decay of the qubit have been omitted). The last one represents the measurement backaction: at each \(\mathrm {d}t\) the state is kicked depending on the measurement record, possibly changing the mean energy of the qubit. The inherent stochasticity of the SME highlights the profound link between information and energy in quantum mechanics and has triggered recent works on the subject, including in the field of superconducting circuits. The reader can refer to the Chaps.  15,  29 and  33 for a more precise treatment of the subject.