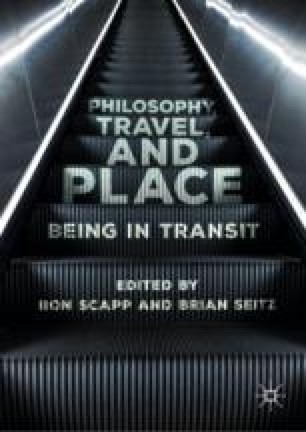 This piece explores the mysterious figurations of the night-traveler: namely, those who master patterns of nocturnal movement and intricately choreograph their infiltrations/escapes around the hours of mass oblivion. To trace the shadow temporalities and spatial imaginaries of the night-traveler, a focus is brought to two specific examples from the contemporary Middle East: first, a Beirut nightclub situated in a devastated district of the city known as “The Quarantine,” and which takes the ominous shape of a bunker with a large retractable metallic roof opening and closing each hour past midnight; second, a Palestinian film installation that stages a fictive dialogue between a rebel leader and a psychoanalyst, the former charged with “narrative terrorism” for planting false relics in the earth and treating myth, memory, and futurity as deceptive art forms. Ultimately, these fascinating images of the night-traveler will allow us to develop new theories of restlessness, wandering, and dromological power tied to a philosophy of the after-dark.

© The Editor(s) (if applicable) and The Author(s), under exclusive licence to Springer Nature Switzerland AG 2018