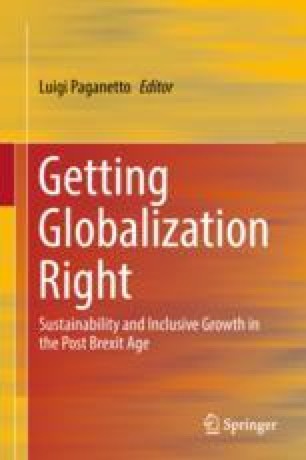 Is Italy on the Pathway for Achieving Sustainable Development Goals?

In this paper, we investigate the current well-being and the future sustainability of Italy. A general equilibrium model is used to estimate the future evolution according to different scenarios in which selected policies are identified in order to evaluate their potential contribution to the SDG achievement. We provide evidence that in a scenario business-as-usual, Italy will not improve significantly its level of well-being. However, with a set of policies specifically targeted in 2030, the Italian sustainability would increase remarkably especially if all policies were implemented simultaneously.

Italian Sustainability Current Welfare APPS Index Environmental Pillars High-level Political Forum (HLPF)
These keywords were added by machine and not by the authors. This process is experimental and the keywords may be updated as the learning algorithm improves.
This is a preview of subscription content, log in to check access.

The current well-being assessment is provided for 139 countries, and it is measured as the overall performance in 16 SDGs (APPS Index).

The future sustainability evaluation sheds some lights on the evolution of SDG indicators up to 2030, under different socio-economic and policy scenarios. On this purpose, historical records of SDG indicators and empirical analyses are combined with a Computable General Equilibrium (CGE) model.

The multi-step APPS methodological framework is synthetized in Fig. 9.

A.1 Screening and Selection of Indicators

Each SDG is structured into Targets. The 169 Targets proposed by the United Nations Open Working Group serves to monitor the actual achievement in quantifiable terms of the SDGs under the different perspectives involved. Progresses over time and compliance with SDG Targets can be measured using indicators. The current list of indicators, adopted in July 2017 by the UN General Assembly, considers 232 indicators (UN 2017).

The multi-step feature of APPS framework implies further constraints to indicator selection in addition to the usual requirements on relevance in measuring the SDG they refer to and connection with a specific quantitative SDG Target. Indeed, APPS indicators need to have good country coverage because the well-being assessment is worldwide and the comparability of the results of aggregation procedure requires excluding countries with missing values for at least one of APPS indicators. In addition, APPS indicators are at country level. Furthermore, the most stringent constraint in selecting APPS indicators comes from the sustainability assessment methodology: drawing the future path of SDG indicators depends on identifying their determinants (empirical analysis on the historical data and evidences from the literature), and, at the same time, depicting future evolution of these determinants. A macro-economic model can offer a coherent scenario-dependent representation of the future; therefore our approach relies on linking SDG indicators to macro-economic variables from a macro model. The lack of any empirical evidence connecting SDG indicators with one or more endogenous variable in our model determined its exclusion from APPS set of indicators.

The final APPS screening considers 28 indicators covering 16 SDGs (All but SDG 5—Achieve gender equality and empower all women and girls). Table 4 lists the APPS indicators coupled with the related SDG and specific target they measure.
Table 4

A.2 Data Collection and Database Organization

Data for all the indicators identified in the previous step have been gathered from international databases. The huge amount of missing data prevented the creation of a solid time series for APPS indicators. Thus, the current database focuses only on the latest available data.

Table 5 reports the source used for each indicator and the number of countries covered. Only 139 countries report data for all the indicators considered.
Table 5

A.3 Benchmarking and Normalization

In order to compare country performance in different SDG indicators and to compute some aggregate measures, it is necessary to bring all indicators to a common measurement unit.

The benchmarking procedure consists in defining the threshold values, \( \underline{x} \) and \( \bar{x} \), for each indicator described above and is the same in the well-being and sustainability assessment. In choosing the threshold levels we firstly looked at the 169 SDG targets, which are our preferred source whether it gives a quantitative target. When the targets are qualitative, as it happens in many cases, other sources were preferred such policy targets in OECD (target in EU of 3% R&D expenditure) or best practices.

Table 6 shows the threshold values used, respectively, for the normalization process of APPS indicators both in well-being and sustainability assessments.
Table 6

A.4 APPS Indices and Ranking

The indicators are calculated using the outputs of the Intertemporal Computable Equilibrium System (ICES) model (Eboli et al. 2010). ICES is a recursive-dynamic CGE model with World coverage based on the GTAP-E model (Burniaux and Truong 2002) and GTAP 7 database8 (Narayanan and Walmsley 2008).

In the model, the economy of each country is characterised by n industries, a representative household and government. Industries minimize production costs and have nested Constant Elasticity of Substitution production functions that combine primary factors (natural resources, land, and labour), a capital and energy composite, and intermediates in order to generate the output. The “Armington assumption” introduces some frictions on the substitutability of inputs imported from different countries.

A regional household in each region receives income, defined as the service value of national primary factors (natural resources, land, labour, capital). Capital and labour are perfectly mobile domestically but immobile internationally; instead land and natural resources are industry-specific. Income of different agents is used to finance three classes of expenditure: private household consumption, public consumption and savings; the utility of private household consumption has a Constant Difference of Elasticities functional form.

A fictitious world bank collects savings from all regions and allocates investments in order to equalise the current rates of return.

Dynamics inside the ICES model are driven essentially by two sources: one endogenous and one exogenous. The first involves capital accumulation and foreign debt evolution governed by endogenous investment decisions. On the other hand, we make several exogenous assumptions concerning trends of population stock, labour stock, labour, land and total factor productivity over time in order to obtain a reference scenario in line with main economic indicators.

The benchmark year for indicators calibration is 2007, and the time horizon for the assessment is 2015–2030.

While the assessment of current well-being is provided for the 139 countries, projecting future sustainability requires some aggregation for the sake of computation. There are 45 countries/regions considered in the model simulations (Fig. 11). The countries singled out are selected on the basis of their relevance for sustainability (high concern for social and environmental issues) as well as population size (covering 70% of World population). Each socio-economic system is then divided into 22 sectors providing commodities/services, chosen according to their contribution to sustainable development indicators.

In order to perform a sustainability analysis, we extended ICES to consider a more detailed sectoral aggregation and to better capture the behaviour of public sector. The new sectors are: Research and Development (R&D), Education, Health, and Renewable Energy Sources (RES). All of them were split from the original GTAP 7 sectors according to the available international statistics which represent the world economy in the year 2007.

For the R&D sector, we used the indicator “R&D expenditure as percentage of GDP” from the World Development Indicators—WDI (World Bank) and the “share of R&D financed by Government, Firms, Foreign Investment and Other National” from the OECD Main Science and Technology Indicators for attributing R&D to the different economic agents.

A similar approach has been used for Education and Health sectors. Data on overall expenditure on health and education have been obtained from the WDI database (World Bank).

In order to regard separately the RES, namely wind, solar and hydro-electricity, they were split from the original electricity sector. The data collection refers to physical energy production in Mtoe (Million tons of oil equivalent) from different energy vectors and for each GTAP 7 country/region. The data source is Extended Energy Balances (both OECD and Non‐OECD countries) provided by the International Energy Agency (IEA). We complemented the production in physical terms with price information (OECD/IEA 2005; EC 2008; Ragwitz et al. 2007; GTZ 2009; IEA country profiles and REN21). The explicit consideration of the RES sector implied some modelling changes: the production function of electricity sector considers a new nest allowing the inter‐electricity substitution between RES and traditional fossil electricity.

For evaluating future sustainability, APPS indicator values around 2007 are collected for each country and introduced into the modelling framework. Their future trends are linked to the dynamics of macro-economic variables in the model.

The Table 7 describes the modelling behaviour of APPS Indicators.
Table 7

aThe equitable and sustainable GHG emission per capita level in 2030 is computed as the ratio of the median GHG emission level in 2030 according to scenarios that will contain (with likelihood > 66%) the temperature increase below 2°C by the end of the century, i.e. 42 GtCO2 e (UNEP 2015), and the median estimate of world population in 2030 (UN 2015)

Building future socio-economic-environmental scenarios into a macro-economic framework implies making assumptions on trends of some exogenous variables. The APPS project uses as a reference source for scenarios those developed by the climate change community and known as Shared Socioeconomic Pathways (SSPs) (O’Neill et al. 2017). These are connected to different mitigation/adaptation challenges and, more extensively, to sustainable pathways of future economic development. SSPs provide references for future patterns of population, labour force and GDP growth. Primary factor productivity, sector-specific efficiency, total factor productivity and energy prices are then used in order to reproduce the trends of GDP, energy use, emissions and value added shares.

Among Shared Socioeconomic Pathways (SSPs), we have for the moment developed the SSP2 “Middle of the road” scenario. The main features of this scenario are: