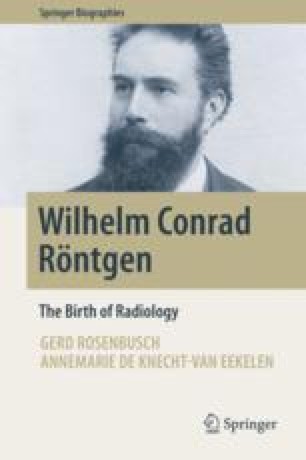 In April 1900, Röntgen and his wife moved to Munich where he was appointed as Professor of Physics. He received the Nobel Prize in Physics in 1901. He travelled to Stockholm for the award ceremony, but he did not give a lecture. Important for the development of physics at the Munich University was the nomination of Arnold Sommerfeld as Professor of Theoretical Physics in 1906. Sommerfeld was a trusted colleague whose students worked together with those of Röntgen. Several of Röntgen’s assistants continued the work on X-rays. To Röntgen, it was Abram Joffe who was most close to his own work on X-rays and crystals. Röntgen took interest in the establishment of the “Deutsches Museum”; he was one of the chairmen of the Presidential Board of the museum. On the occasion of his 60th birthday, his colleagues and friends donated a plaque in commemoration of his discovery of the X-rays to be mounted in the Würzburg Institute.