Topics in the Mathematical Modelling of Composite Materials 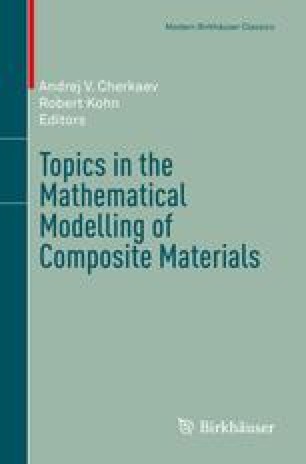 On the Control of Coefficients in Partial Differential Equations

This article is a translation of an article originally written in French entitled Problémes de controle des coefficients dans des équations aux dérivées partielles, published in Control Theory, Numerical Methods and Computer Systems Modelling (Proceedings IRIA 1974), A. Bensoussan and J.-L. Lions, eds., Lecture Notes in Economics and Mathematical Systems, 107, Springer-Verlag, (1975), 420-426. The original article was signed only by L. Tartar who delivered the lecture in which he presented joint work that we were performing at that time. We prefer to present its English translation with our both names.