The Grand Ethiopian Renaissance Dam on the Blue Nile 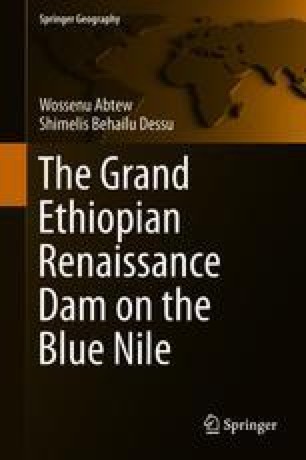 Ethiopia unilaterally launched the construction of the Grand Ethiopian Renaissance Dam (GERD) on the main Blue Nile River (Abay) in April 2011. Since then, a series of negotiations have been conducted between Ethiopia, Egypt and Sudan at expert, ministerial and head of state levels, mainly to address Egypt’s concern on potential reduction of river flow as a result of the dam. The GERD is portrayed by Egypt as threat for water security while Sudan appears comfortable with immediate access to both water and power. Sudan has tacitly approved Ethiopia’s desire to build the dam anticipating benefits from a dam close to its border that could settle out sediment and control flooding. Other concerns include rate of initial dam filling, dam operations, and potential dam failure. There were four major agreements between Ethiopia, Sudan and Egypt to address these concerns: formation of International Panel of Experts, signing of Declaration of Principles by heads of states, meeting of foreign and irrigation and water ministers on implementation of IPoE recommendations, approval of water resource and hydropower simulation study by international consultants. Several meetings and consultations have been conducted without tangible outcome because of the complexity of the problem. Several seesaw of agreements and disagreements, cooperation and concern, have been reported albeit any clear future path. At this time, after reviewing the preliminary report of the study plans by the French firms, Ethiopia has pulled out of the support for the study. Significant domestic political instability in Egypt, Sudan and Ethiopia during the construction of GERD has been contributing to the slow and uncertain progress of dialogue and diplomacy.