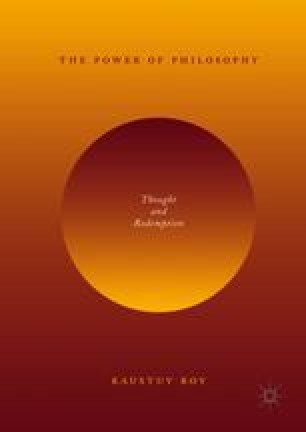 This chapter addresses the question: Does the possibility of philosophical freedom, that is, attaining existential renewal by means of serious engagement in philosophy, still exist? Or has philosophy long been reduced to just another formal academic pursuit, recapitulating tired debates and worn-out positions in novel ways? Is there left to us a doing of philosophy, or rather, can philosophy do something with us? Some like Theodor Adorno seemed to be skeptical of the possibility. In the introduction to Negative Dialectics, Adorno wrote: “Philosophy remains alive because the moment of its realization was missed.” In other words, humanity failed to attain to philosophy at the very moment when it was ripe for existential and phenomenological realization. So now it merely lives on as a formal discourse, alive only because it did not come to fruit? However, assuming that Adorno was speaking from the standpoint of redemption, can the moment of realization of freedom be truly lost? For, must not freedom be implicitly understood to be a blossoming that is free of the category of time as repetition and procession of historical content? If the latter is the case then philosophy can still do much with us by giving us a new vantage point from where we can look beyond the historical content of thought.

thinkingThinking beingBeing essenceEssence ideaIdea philosophyPhilosophy
These keywords were added by machine and not by the authors. This process is experimental and the keywords may be updated as the learning algorithm improves.
This is a preview of subscription content, log in to check access.