Goods and Services of Marine Bivalves 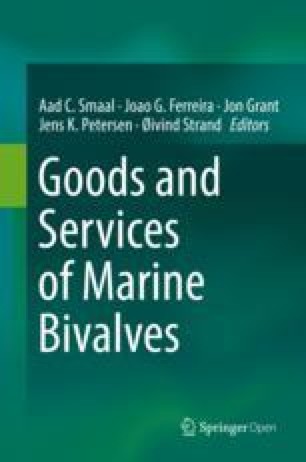 Bivalves are foundation species with important regulating functions in the ecosystem. This is due to their function as filter feeders, their capacity to extract particles, to regenerate as well as store nutrients and – for the epibenthic bivalves –, their capacity to form hard structures. These services can be applied in many ways as is exemplified in this section. It seems likely that more applicable functions will emerge from the studies reviewed in this section.

The regulating services from bivalves originate from their effects and controlling functions on ecosystem processes and natural cycles.

In natural habitats where bivalves dominate, they may control functions related to

In bivalve aquaculture, regulating services are typically seen when large biomasses are grown for human consumption or in production for energy and feed. But there is also a range of examples where services are shown from more extensive culture initiatives related to enhancement and restoration of bivalve populations, indigenous and invasive. In this chapter, the authors view regulating services from bivalves for a large range of spatial scales, from intensive land-based culture systems to narrow embayments and open sea ecosystems.

As most bivalves are efficient filter feeders on suspended particles, they may exert substantial effects and control of primary production processes, and concentrations of particulate matter. Elevated concentrations of particles and thereby turbidity caused by eutrophication often appears and is visible in densely inhabited coastal areas. The control of such conditions by bivalves is a classic example often promoted as a service regulating and mitigating eutrophication and other undesirable environmental conditions (Petersen et al. 2014). However, it may also be found that consolidation of phytoplankton and particulate organic matter into waste particles (undigested as faeces and uningested as pseudofaeces) redirect part of the undesired particle concentration which we wish to mitigate towards the benthic food web, potentially causing problems. Depending on the type of environment and dispersion pattern of particles, such biodeposition can cause hypoxic or anoxic bottom conditions, which may require further mitigation. These associated biodeposition processes are often ignored. From a wider perspective, biodeposits are sites of mineralization and regeneration of inorganic nutrients. Hence, filtration of suspended particles, biodeposition and biomineralization can provide a positive feedback mechanism in food production, as the regenerated nutrients stimulate primary production that provides feed for the bivalves: feedbacks through filter feeding. The question is how these processes perform under various conditions, in particular with respect to background nutrient concentrations in oligotrophic or eutrophic environments.

Bivalves have been regarded as a prime candidate as extractive species in Integrated Multi-Trophic Aquaculture (IMTA) (Chopin 2013). They may capture waste particles directly from farm discharge and eventually they can extract products coming from another trophic level that converts the waste (bacteria, phytoplankton, zooplankton). Their possible role in providing regulating services when cultured in IMTA vary with type of culture, waste source, environmental conditions, and is certainly also governed by the wider socio-economic differences in aquaculture practice in Asia and the Western World.

Marine and coastal environments play a vital role in regulating the global climate via the carbon cycle, in which organisms precipitating calcium carbonate receive special interest. Bivalves are regarded to be particularly susceptible to ocean acidification, often related to their importance in coastal ecosystems and in aquaculture production. In addition, their role has been emphasised in redirecting suspended particles to the benthic environment and burying organic carbon that potentially can increase carbon sequestration.

The regulating services from bivalves are in many cases based on mitigation of eutrophication and recirculation of anthropogenic waste from land or coastal activities. The distribution of waste sources, hydrodynamic patterns and the physical domain under consideration determine the complexity of the ecosystem and thereby possibilities to assess regulating services. The ecological complexity is often disregarded, and the valuation of the service tends to be based on limited assessments. In developing concepts of regulating services from bivalve shellfish there might be a sequence from general assumptions to model results and extrapolations from experimental studies to full scale environments. The ultimate challenge is to carry out measurements and validation supporting how target processes are affected and mitigated at the full scale.

The images or other third party material in this book are included in the book's Creative Commons license, unless indicated otherwise in a credit line to the material. If material is not included in the book's Creative Commons license and your intended use is not permitted by statutory regulation or exceeds the permitted use, you will need to obtain permission directly from the copyright holder.