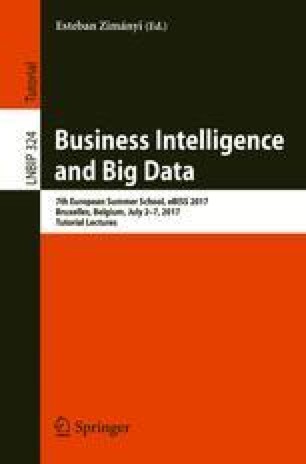 Extract-Transform-Load (ETL) processes are used for extracting data, transforming it and loading it into data warehouses (DWs). The dominating ETL tools use graphical user interfaces (GUIs) such that the developer “draws” the ETL flow by connecting steps/transformations with lines. This gives an easy overview, but can also be rather tedious and require much trivial work for simple things. We therefore challenge this approach and propose to do ETL programming by writing code. To make the programming easy, we present the Python-based framework pygrametl which offers commonly used functionality for ETL development. By using the framework, the developer can efficiently create effective ETL solutions from which the full power of programming can be exploited. In this chapter, we present our work on pygrametl and related activities. Further, we consider some of the lessons learned during the development of pygrametl as an open source framework.

This appendix offers a very short introduction to concepts and terms used in the chapter. More details and explanations can be found in the literature [7, 8, 27]. In a data warehouse (DW), data from an organization’s different operational systems is stored in a way that supports analysis (rather than the daily operations which are supported by the operational systems). An Extract-Transform-Load (ETL) process extracts data from the source systems, transforms the data (to make it fit into the DW and to cleanse it), and loads it into the DW. Data is divided into facts and dimensions. Facts represent the subjects of the desired analyses (e.g., sales) and have numerical measures (e.g., sales amount). Dimensions provide context and describe facts (Product, Store, and Time are, for example, relevant dimensions for sales). Dimensions are thus used for selection of data and grouping of data in analyses. Dimensions have hierarchies with levels (a Time dimension can, for example, have the hierarchy Day \(\rightarrow \) Month \(\rightarrow \) Quarter \(\rightarrow \) Year). Each of the levels can also have a number of attributes.

Changes may happen in the represented world. It is thus necessary to be able to represent changes in dimensions. A dimension where changes are represented is called a slowly changing dimension (SCD). There are a number of different techniques for SCDs [8]. Here we will consider two of the most commonly used. For type 1 SCDs, changes are simply represented by overwriting old values in the dimension tables. If, for example, the size of a shop changes, the size attribute is updated. This can be problematic as old facts (e.g., facts about sales from the shop when it had the previous size) now refer to the updated dimension member such that history is not correctly represented. This problem is avoided with a type 2 SCD where a new version of the dimension member is created when there is a change. In other words, for type 2 SCDs, changes result in new rows in the dimension tables. In a type 2 SCD, there are often attributes called something like ValidFrom, ValidTo, MostCurrentVersion, and VersionNumber to provide information about the represented versions.