Philosophy and Theory of Artificial Intelligence 2017 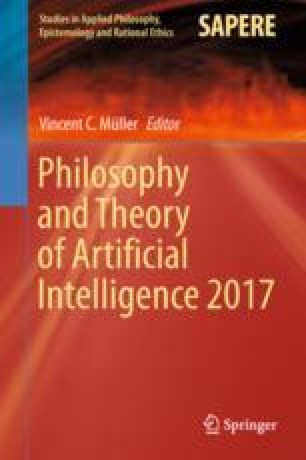 3rd Conference on "Philosophy and Theory of Artificial Intelligence

New types of artificial intelligence (AI), from cognitive assistants to social robots, are challenging meaningful comparison with other kinds of intelligence. How can such intelligent systems be catalogued, evaluated, and contrasted, with representations and projections that offer meaningful insights? To catalyse the research in AI and the future of cognition, we present the motivation, requirements and possibilities for an atlas of intelligence: an integrated framework and collaborative open repository for collecting and exhibiting information of all kinds of intelligence, including humans, non-human animals, AI systems, hybrids and collectives thereof. After presenting this initiative, we review related efforts and present the requirements of such a framework. We survey existing visualisations and representations, and discuss which criteria of inclusion should be used to configure an atlas of intelligence.

The initiative was supported by the Leverhulme Trust via the Leverhulme Centre for the Future of Intelligence. J. H-Orallo and F. M-Plumed were supported by EU (FEDER) and the Spanish MINECO under grant TIN 2015-69175-C4-1-R and by GVA under grant PROMETEOII/ 2015/013 and by the Air Force Office of Scientific Research under award number FA9550-17-1-0287. J. H-Orallo also received a Salvador de Madariaga grant (PRX17/00467) from the Spanish MECD for a research stay at the CFI, Cambridge, and a BEST grant (BEST/2017/045) from the GVA for another research stay also at the CFI. F. M-Plumed was also supported by INCIBE (Ayudas para la excelencia de los equipos de investigación avanzada en ciberseguridad). A. Weller acknowledges support from the David MacKay Newton research fellowship at Darwin College, the Alan Turing Institute under EPSRC grant EP/N510129/1 & TU/B/000074, and the Leverhulme Trust via the CFI.

A Appendix: Why is an atlas needed? Similar initiatives

While identifying the need for an atlas, we look at how it fits in cognitive science as a whole and also whether there are initiatives in other fields that could be inspirational.

Regarding cognitive science, it is true that its goal is to cover all possible cognitive systems, understand their behaviour and mechanisms, and establish meaningful comparisons. However, the field has not yet been able to portray a systematic representation covering both natural and artificial systems. But if we do not find this systematic representation in cognitive science, do we find it in related subdisciplines? The answer is that some similar initiatives in other disciplines do exist2:

A partially overlapping initiative is the AI Roadmap Institute18, which encourages, compares and studies various AI and general AI roadmaps. It focuses on the future and on AI primarily, with representations that are usually flowcharts and pathway comparisons. Besides identifying where the field of AI stands as a whole, it also aims to identify dead-ends and open research problems on the path to the development of general AI systems.

The data and conceptual framing of the above projects can be used to inform an atlas of intelligence. Still, no repositories or taxonomies exist focusing mostly on behaviour, encompassing natural and artificial systems, as we are undertaking. Of course, the fact that something does not exist yet is not a sufficient reason that it should. The need for an atlas has to be supported by a series of motivations and applications, which we do in Sect. 2.