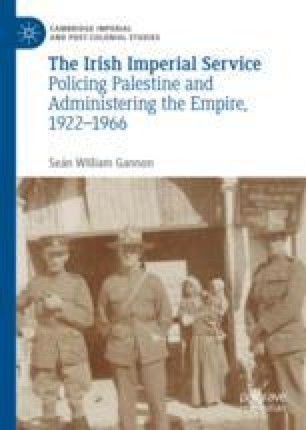 Building on a detailed examination of Irish enlistment in Britain’s imperial services in the second half of the long nineteenth century, Chap.  5 takes as its subject Irish imperial services’ recruitment in Southern Ireland after independence in 1922. Although account is taken of the Indian civil and medical services, the British Colonial Service (BCS) forms the focus as the service in which the great majority of Irish citizens served. It assesses the extent of Irish enlistment in the BCS between 1922 and the Colonial Office’s closure in 1966 and takes a prosopographical approach to examine the religious and socioeconomic background from which enlistments were drawn. The factors which informed the decisions of Irish citizens to join the BCS are explored in detail.

Irish Recruitment British Colonial Service (BCS) Imperial Service Colonial Office Irish Doctors
These keywords were added by machine and not by the authors. This process is experimental and the keywords may be updated as the learning algorithm improves.
This is a preview of subscription content, log in to check access.