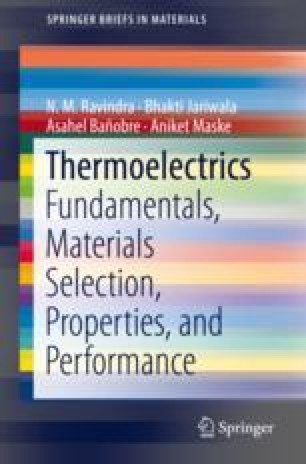 Chapter
Part of the SpringerBriefs in Materials book series (BRIEFSMATERIALS)

The thermoelectric effect can be generally defined as electricity that can be attributed to the result of a temperature gradient across a junction of two different metals or vice versa. It is further classified by two basic effects, known as Seebeck effect and Peltier effect. In the early 1900s, during his experiments, Seebeck [1] observed that a compass needle was deflected when it was placed in the vicinity of a closed loop that was made up of two different electrically conducting materials, when one of the junctions was subjected to heat. It was named as “thermomagnetic effect” by Seebeck, who thought that it involved magnetic interactions. However, it was later discovered by Oersted that it was related to electron flow (current) rather than magnetic fields, and he classified it as “thermoelectric effect.” Fundamentally, an electromotive force is generated in any isolated conducting material when it is subjected to a temperature gradient. This is known as Seebeck effect, as explained in Sect. 1.1.1. A reverse of Seebeck effect was observed by the French scientist Peltier [2] in which heat is absorbed or released when a current crosses an interface between two different conductors. The passage of an electric current through a pair of dissimilar conductors produces a small amount of heat at the junction; this is called Peltier effect and is described in Sect. 1.1.2. After a few years, Thomson [3] realized that these two thermoelectric effects, Seebeck effect and Peltier effect, are related to each other and their relation is described in terms of their coefficients through thermodynamics. Thomson found that when the combination of these two effects – i.e., both the flow of electric current and a temperature gradient are present in a homogeneous conductor – one can observe reversible heating or cooling simultaneously, known as Thomson effect.

Peltier Effect Thermoelectric Effect Thomson Effect Seebeck effectSeebeck Effect Homogeneous Conductor
These keywords were added by machine and not by the authors. This process is experimental and the keywords may be updated as the learning algorithm improves.
This is a preview of subscription content, log in to check access.