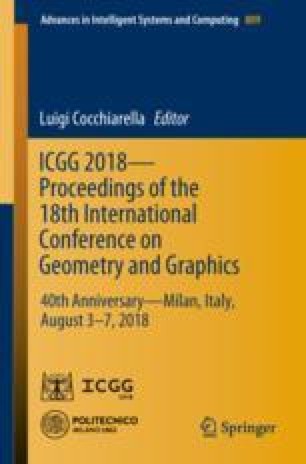 International Conference on Geometry and Graphics

From Voxels to Parts: Hierarchical Discrete Modeling for Design and Assembly

Developing from researches on heterogeneous modelling and voxel-based design, as well as on digital materials and discrete assembly, the paper describes current developments of Wasp, a software tool for hierarchical discrete modelling of objects as aggregations of modular parts, with focus on the generation of architectural objects. By conceptualizing the discrete nature of the final objects already within the software, it becomes possible to model heterogenous artefacts composed of basic parts, which are reversibly joined into a complete aggregation. Within such framework, users are provided with different aggregation procedures to select rule sequences producing the desired outcomes, as well as basic utilities for part collisions avoidance, visualization and editing of the produced geometries. To increase control over designed objects, the framework has been extended to include hierarchical modelling with multi-resolution parts, more advanced generation and editing functions for voxel fields, multi-channel scalar fields and global constraints. Overall, the aim of the framework is to allow modelling of objects as aggregations of discrete units with reversible connections, hence allowing the production of architectural entities which could be assembled, disassembled, and reconfigured during their lifecycle.

The authors would also like to thank A. Stefas and L. PanahiKazemi, whose input highly contributed to the development of the ideas and the techniques behind the described research.

Cite this paper as:
Rossi A., Tessmann O. (2019) From Voxels to Parts: Hierarchical Discrete Modeling for Design and Assembly. In: Cocchiarella L. (eds) ICGG 2018 - Proceedings of the 18th International Conference on Geometry and Graphics. ICGG 2018. Advances in Intelligent Systems and Computing, vol 809. Springer, Cham