Humanistic Pedagogy Across the Disciplines 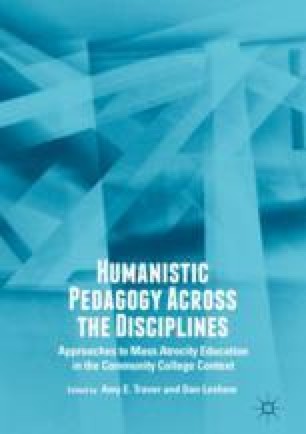 Humanistic Pedagogy Across the Disciplines pp 69-91 | Cite as

Despite progress in the development, embrace, and implementation of mass atrocity education, scholars point to a significant oversight of this growth: few programs systematically evaluate or assess their outcomes. Given that the pursuit of evidence permeates all aspects of education in the United States today, this chapter focuses on outcomes assessment in American higher education. To connect this focus to published research on mass atrocity education, it relates exemplary studies from that literature to the outcomes assessment process. The chapter also focuses on the author’s efforts, as coordinator of the 2015–2016 National Endowment for the Humanities (NEH)/Kupferberg Holocaust Center (KHC) Colloquium Series, “Gender, Mass Violence, and Genocide,” to evaluate and assess the series’ impacts. The chapter concludes by connecting outcomes assessment to the aligned work of faculty across the series’ years.

September 30, 2015: Gender and the Future of Genocide Studies

Dr. Natalie Nenadic, Assistant Professor of Philosophy at the University of Kentucky

November 18, 2015: Multiple Girlhoods: Growing up in Bosnia Before and During the Civil War

December 2, 2015: Gendered Experiences in and Memories of the Nazi Holocaust

Dr. Rochelle Saidel, Founder and Executive Director of the Remember the Women Institute

Dr. Marianne Hirsch, William Peterfield Trent Professor of English and Comparative Literature at Columbia University and Professor in the Institute for Research on Women, Gender, and Sexuality

February 17, 2016: Gendercide: Inclusivity in the Study of Gender, Mass Violence, and Genocide

Dr. Adam Jones, Professor of Political Science at the University of British Columbia

March 23, 2016: Spanish Women and Fascism Under the Francoist Dictatorship

Ms. Luque Delgado, Professor of Phonetics at the Ortega-Marañón Foundation and Middlebury University