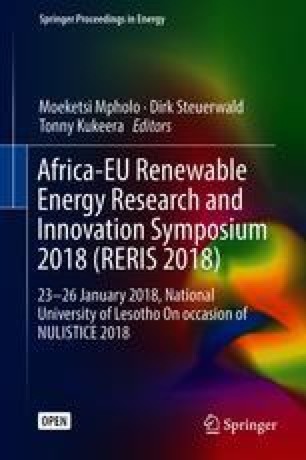 Africa is endowed with a very important renewable energy potential. Exploited, this potential permits the continent not only to get out of the energy poverty it is suffering from but also to ensure a sustainable development. In the present work, the economic viability of renewable power generation is assessed and analyzed. Then an identification and discussion of the impacts that the renewable energy deployment could have on socio-economic progress, health, education, gender equity and rural development are carried out.

Africa suffers from energy deficit. Indeed, though it represents 16% of the world population, it consumes only 3% of the power generated worldwide. More than 600 million Africans have no access to electricity [1]. The electrical networks are also plagued by technical problems. Because of aging and poorly maintained transmission and distribution networks, the electrical grids experience big losses and recurrent outage. In fact, 95% of the African countries experience electrical losses larger than the world average losses. Countries, such as Libya and Togo, experience staggering losses respectively of the order of 69.7 and 72.5% [1].

The grid system suffers also from high recurrence and high duration of outages. It has been reported that Senegal, Tanzania and Burundi experience unbelievable outages that sum up respectively to 45, 63 and 144 days/year [2]. Moreover, Africa suffers from a lack of access to clean fuels and modern technology for cooking. About 60% of the African population rely on traditional firewood or charcoal air polluting stoves for cooking. The damage to health is enormous [3].

Given the actual state of most of the African states economies, capital cost could be a serious hurdle for most of them. Fortunately, there are many funding opportunities focused or related to renewable energy that must be grabbed.

These opportunities should be sought from local or public sectors or from the development finance institutions. Among the development finance institutions, there is the World Bank that is ready for renewable energy deployment through its Climate Investment Fund and its Strategic Climate Fund [6]. There is also the African Development Bank which gets involved in renewable energy deployment through its Sustainable Fund for Africa and its Partial Risk Guarantees. Green Facility for Africa, African Development Fund, International Climate Fund, Global Environment Fund, Global Energy Efficiency and Renewable Energy Fund and Global Environment Facility Trust Fund are development finance institutions that are deeply involved in renewable energy deployment in Africa. Funding in Africa could be under the form of a loan, a rebate, a subsidy or a grant. The funding could also take the form of a technical support or an action of awareness and training.

There are different methods for assessing the economic viability of renewable energy production facilities deployment. The assessment could, for example, be based on the net revenue or on the production cost relative to the cost of production of a non-renewable energy production technology [3, 7]. The levelized cost of energy (LCOE) is usually used to provide an indication of the competiveness of energy generation of a given technology. In Table 5.2, the levelized cost of power generation based on renewable and non-renewable energy sources are reported [8, 9]. From this Table, it can be noticed that Solar PV and wind systems connected to the grid are competitive with gas turbines. The same way, geothermal, bio-power and hydropower connected to the grid are competitive with gas turbines and combined cycles. Mini-grid and off-grid technologies for solar PV and wind remain expensive by comparison to grid connected technologies. Nonetheless, they offer flexibility and if power transport is taken into consideration, they will be more attractive. It must be added that different local aspects could affect the economic viability of renewable energy deployment:
Table 5.2

Renewable energy deployment has social impacts on different levels. The impacts could be at the socio-economic level, the improvement of quality of life, health and education.

Renewable energy influences positively the contribution to industrial development and job creation throughout the whole chain of the energy deployment. As shown in Fig. 5.1, the impacts occur at different phases of the deployment: from the deployment-planning phase to the system operation phase [11].

For the local involvements to be successful, there should be sound supporting processes. These processes include [11]:

An analysis of the African primary energy use shows that the use of traditional biomass fuel, constituted mainly of firewood and charcoal, outweighs the demand for all other forms of energy combined. The share of biomass fuel in the primary energy mix is more than 84% in the residential sector and about 7% in the industrial sector [12].

Figure 5.2 shows the percentage of the population that rely on biomass bio-fuel. It can be noted from this Figure that 60% of the African population, i.e. about 730 million, rely on polluting fuel. In the case of Benin, Burkina Fasso and more particularly Uganda, this percentage is very high; it is more than 94% [12]. It should also noted that almost 850 million have no access to clean cooking.

The traditional use of biofuel not only causes pollution and leads to deforestation but is also a major source of health problems. It has been reported that the use of firewood or charcoal stoves are the reason for  the spread of very serious illnesses such as respiratory infections, strokes, lung cancer and pulmonary diseases. These low efficiency stoves expose people living in particularly poorly ventilated houses to carbon monoxide and other toxic matters. Women and infants, who spend most of the time indoor, suffer the most.

The deployment of renewable energy introduces affordable, clean and modern energy technologies. This reduces and eventually phases out the need for traditional biomass fuel. This undoubtedly facilitates the introduction of clean energy and modern technology stoves. This leads to a drastic reduction of indoor pollution, reducing and eventually eliminating the health threat associated with this phenomenon. Infants and women wellbeing would then increase.

Moreover, the deployment of renewable energy can improve people’s health by enhancing health services. Survey by the World Health Organization has found that actually 58% of health institutions in a large number of African countries have no access to electricity [12]. Indeed, by assuring the electrification of the health institution infrastructures, it is possible to offer modern health services such as the use of modern health equipment for diagnostic and treatment [13]. Electricity is needed for refrigeration of pharmaceutical products, medical tools sterilization and for emergency procedures.

Arguing that schooling takes place during daytime in order to delay school electrification is false and harmful. It is false as schooling could be extended to after daytime and that homework and class preparation usually take place at night. It is also false in the sense that electricity is needed not only for lighting but also for the energy that powers equipments, such as computers and laboratory instrumentations that are necessary for the education. It is harmful in the sense that the process that ensure the provision of a quality education is overlooked. Indeed, a lack of electrification usually leads not only to pupils’ failure with a large drop out but this could hinder the attraction of the most competent teachers and their retention.

Renewable energy deployment, by its flexibility and adaptability to different regions, is capable of ensuring a viable schools electrification. Among the positive impacts of the renewable, there is [15].

This could be explained in part by the power grid system adopted by the African countries. This system is centralized and as such is not well adapted to scarcely populated areas such as the Sahara and the Kalahari deserts or to scattered dwellings such as the case of the African rural areas. It should be noted that 60% of the African population live in such areas. The extension of the centralized grid to these scarcely populated or scattered dwellings areas is financially prohibitive and technically challenging.

Nonetheless, the off-grid technologies, using renewable energy sources, have proven to be appropriate for the electrification of the rural areas. These technologies, either on stand-alone, micro-grid or mini-grid, have become the options for localities where central grid connections are neither available nor affordable.

The first impact is an improvement in human health and a reduction of indoor pollution, as a result of replacing kerosene lamps by electricity for lighting and firewood stoves by modern stoves for cooking.

With electrification, there are possibilities of using household appliances, such as refrigerators and blenders. This has the effect of not only improving people’s diet but also saving time that could be used in more productive activities.

Electrification offers also the opportunities for local education. Studies have shown that rural electrification has led to an increase in rural school enrolment [28] and to a reduction in rural exodus [29].

Electrification can also boost agriculture productivity. By allowing irrigation through water pumping and by permitting crops storages and processing, electrification offer the opportunity to the farmers to contribute to the agro-industry sector and by that increase their incomes.

Africa’s energy deficits and technical power problems have been hampering its sustainable economic growth. To solve these problems, the African countries are resorting to the development of their important renewable energy potential. National energy programs have been devised and policy instruments for their implementations identified.

<SimplePara><Emphasis Type="Bold">Open Access</Emphasis> This chapter is licensed under the terms of the Creative Commons Attribution 4.0 International License (http://creativecommons.org/licenses/by/4.0/), which permits use, sharing, adaptation, distribution and reproduction in any medium or format, as long as you give appropriate credit to the original author(s) and the source, provide a link to the Creative Commons license and indicate if changes were made.</SimplePara> <SimplePara>The images or other third party material in this book are included in the book's Creative Commons license, unless indicated otherwise in a credit line to the material. If material is not included in the book's Creative Commons license and your intended use is not permitted by statutory regulation or exceeds the permitted use, you will need to obtain permission directly from the copyright holder.</SimplePara>