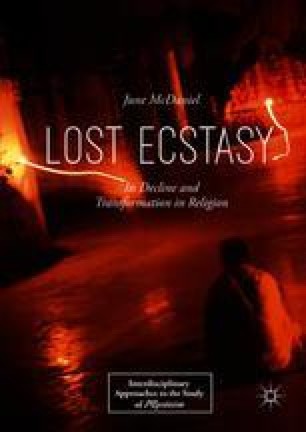 Some Examples of Religious Ecstasy

This chapter introduces some basic data for the study of ecstatic and mystical states. It includes some forms of ecstasy from five major world religions, and the ways that these states have been interpreted. Under Judaism, we include Biblical prophecy (ecstatic if not mystical) and the prophetic Kabbalism of Abraham Abulafia. Under Christianity, there is Catholic Mysticism (St. Augustine and St. John of the Cross), and the Orthodox ecstasy of theosis . For Islam, we have Shia ecstatic sorrow, and Mevlevi ecstatic joy. For Hinduism, we have Bengali Shaktism and Ramprasad Sen’s ecstatic poetry to Kali. For Buddhism, we have the salvific joy of Pure Land Buddhism and the Kagyu bliss of the Inner Fire.

Cite this chapter as:
McDaniel J. (2018) Some Examples of Religious Ecstasy. In: Lost Ecstasy. Interdisciplinary Approaches to the Study of Mysticism. Palgrave Macmillan, Cham