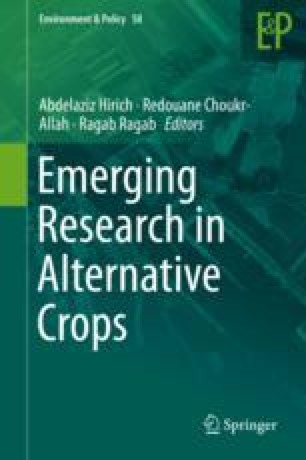 Phenotyping the Combined Effect of Heat and Water Stress on Quinoa

Quinoa is a pseudo-cereal crop that originates from Latin America and has been shown to be resistant to various abiotic stresses including water, salinity, frost, and heat stress. Quinoa was subjected, in the beginning of twenty-first century, to a large number of researches in all parts of the world including GCC (Gulf Cooperation Council) region which was characterized by a harsh climatic condition, excessive heat, and water scarcity. This experiment was conducted in the International Center for Biosaline Agriculture, UAE, in order to phenotype the responses of quinoa to heat and water stress. The experiment consisted of a germination test and pot trial. The germination test was performed for five quinoa lines under five temperatures (2, 10, 22, 30, 42 °C). Obtained results indicate that germination velocity increased with increased temperature up to 30 °C then decreased under heat stress (42 °C). Germination rate followed the same trend with nonsignificant difference between temperatures below 30; however, under 42 °C, germination rate has been reduced by 13% compared to 22 °C.

The pot experiment was conducted during the period of May to August 2016 aimed to phenotype 5 quinoa lines under four different environments: greenhouse cooled at 24 °C, greenhouse cooled at 29 °C, greenhouse cooled at 35 °C, and open-air conditions (T max exceeds 42 °C). Quinoa was also subjected to water stress (50% of full irrigation) during vegetative growth stage. Several morphological and physiological traits have been monitored including plant height, stem diameter, number of primary branches, leaf architecture, number of primary panicle, panicle weight, shoot weight, seed yield, seed size, days to flowering, days to maturity, stomatal conductance, and leaf temperature. It has been shown that heat and water stress affected all phenotypic and physiological traits, but a more pronounced effect was observed under heat stress compared to water stress. Heat and water stress affected negatively and delayed the flowering and maturity. Q5 and NSL 106399 lines flowered and matured early compared to other lines. Flowering has been inhibited under greenhouse cooled at 35 °C and open-field conditions due to excessive heat causing pollen sterility. The highest growth and productivity performances of quinoa lines were obtained under greenhouse cooled at 24 °C. Q5 and NSL 106399 lines were shown to be the most productive and resistant to heat stress. Stomatal conductance as physiological parameter was affected negatively by both heat and water stress. There was a reduction of more than 90% in average under open-field conditions compared to greenhouse cooled at 24 °C.

The finding indicates that heat stress is a limiting factor for quinoa adaptation under GCC conditions. It is recommended to grow quinoa during the mild season (October to April). Temperature exceeding 30 °C during flowering and grain filling stages was shown to be, agronomically and economically, the threshold of quinoa production where beyond this threshold seed yield is greatly affected.