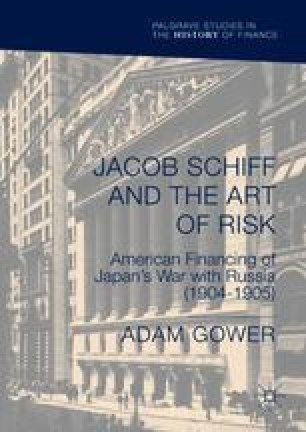 The Russo-Japanese War marked a watershed for Japan. Jacob Schiff’s role was pivotal, yet it has largely gone unexamined. The war was a geopolitical event that fundamentally changed the country’s position in the world. In his overview of the history of Japan, Edwin Reischauer asserts that the country had ‘come close to collapse’ as a result of the war and that, in prevailing in the war, Japan had taken a major step to becoming ‘a true world power’. Reischauer does not mention Schiff. (Edwin O. Reischauer, Japan: The Story of a Nation (Tokyo: Charles E. Tuttle, 1981), p. 370.)

Gutwein Japanese Loans Japan Finance Sixth Great Power Jewish Motifs
These keywords were added by machine and not by the authors. This process is experimental and the keywords may be updated as the learning algorithm improves.
This is a preview of subscription content, log in to check access.