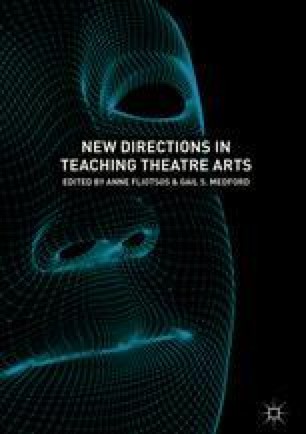 Approaches to “Audience-Centered” Performance: Designing Interaction for the iGeneration

Contemporary media users—specifically iGen students, born in the 1990s through 2010 —see and operate with(in) the world in a fundamentally different manner than those that came only a decade before. In twenty-first-century techno-culture, the pervasive influence of the Internet accessed through the medium of smart devices makes constant multitasking and direct interaction necessary for effective learning in iGen students. These students have adapted their way of seeing and interacting to a media-saturated environment where they are connected to multiple times, places, and things simultaneously. Teachers of contemporary theatre practice should understand this change as an epistemological shift, which also impacts what iGen students expect from theatre. This chapter argues for a new direction towards thinking through digital paradigms to reassemble what theatre is and what it will be for today’s and tomorrow’s students. The constant interactive nature of these students’ digital lives requires that educators understand new ways of teaching theatre creation when considering audiences of the future.

A starting point for developing pedagogical tools that engage students in the process of interactive theatre-making is to examine existing frameworks and methodologies for implementing interaction developed in technology and games studies. Fundamentals of interaction design from these fields are crucial to understand when teaching interactive theatre for digital natives. In interactive theatre, the audience becomes the center of the performance as participant, observer, and author, thereby changing the focus of theatrical storytelling and performance from making something seen into something experienced.

Digital Paradigm Theatrical Storytelling Theatre Makers Canonical Trajectory Performed Experiment Design
These keywords were added by machine and not by the authors. This process is experimental and the keywords may be updated as the learning algorithm improves.
This is a preview of subscription content, log in to check access.