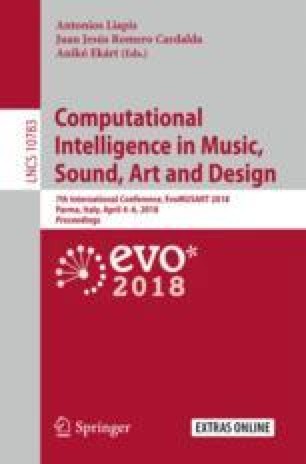 The paper describes a novel multi-objective evolutionary algorithm implementation that generates short musical ideas consisting of a melody and abstract harmonization, developed in tandem. The system is capable of creating these ideas based on provided material or autonomously. Three automated fitness features were adapted to the model to evaluate the generated music during evolution, and a fourth was developed to ensure harmonic progression. Four rhythmical pattern matching features were also developed. 21 pieces of music, produced by the system under various configurations, were evaluated in a user study. The results indicate that the system is capable of composing musical ideas that are subjectively interesting and pleasant, but not consistently.

Thanks to the four reviewers for comments that helped to greatly improve the paper.

In 17 and 18, the last four measures are only checked against the previous four, and not between themselves.

\(-40\) if there is no major or minor third in the chord, in relation to the chord root.

\(-20\) if any of the pitches is in a semitone distance to any other note in the chord (this condition is ignored in case the pitch is considered a meaningful seventh).

\(-10\) for dissonant pitches (that do not belong in the triad chord specified by the chord root).

\(-30\) for invalid pitches (pitches not found in the chord, or in the melody within the measure the chord is played; a major third is not considered dissonant, nor invalid, if it appears within a dominant chord in a minor key).

\(-20\) if the chord following a dominant chord is not a tonic chord.

\(-20\) if the same chord root appears in three consecutive positions.