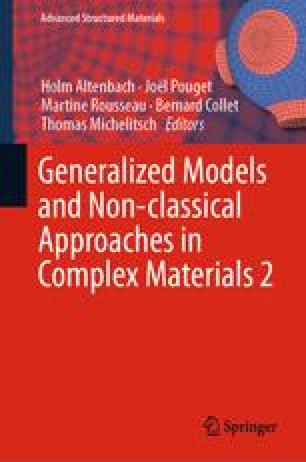 The Principle of Virtual Power (PVP): Application to Complex Media, Extension to Gauge and Scale Invariances, and Fundamental Aspects

This study relative to the principle of virtual power, based on the notions of duality and invariance, owes much to the scientific formation that one of us received directly, in Paris, from Professor Maugin and his first students and collaborators, mainly B. Collet and J. Pouget. As for its extension to gauge and scale invariances and the search for a more solid conceptual basis likely to go back to the origin of the notion of duality, they would not have been possible without the contributions, remarks and criticism of the members (epistemologists, physicists and mathematicians) of the “Epiphymaths” group (an interdisciplinary seminar held weekly at Besançon), especially, J. Merker who presented, in the nineties of the last century, recent studies concerning an autonomous dynamical framework, dealt with through group theory, and C. A. Risset who, later on, accompanied this research over the years, bringing different suggestions and improvements.