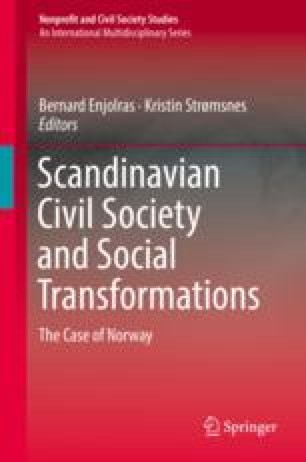 An Organizational Landscape in Transformation

This chapter looks at changes in the population of associations, organization structures, and patterns of collaboration with other organizations, businesses, and the public sector, harnessing data from several censuses and surveys conducted among national and local voluntary organizations in Norway from 1980 to 2013. The purpose is to provide an empirical overview of changes in the voluntary sector since the 1980s and assess how the processes of individualization, immigration, digitalization, and development of New Public Management (NPM) have affected the structural features of the Norwegian voluntary sector and transformed the popular movement model that has been dominant in Norway since the 1840s. The organizational landscape at the local level has been transformed resulting from an increased local community orientation related to the decline of the popular movements. At the national level, there is a significant increase in public interest organizations and no decline in traditional organizations. The findings support the thesis of a weakening of the hierarchical organizational model, seen from both the local and national levels, resulting in a development toward a two-tiered organizational society. However, there is also an array of evidence pointing toward an increasing prevalence of network-based communication as an alternative to a hierarchical structure and as a means of linking members and decision-makers in national organizations as well as local organizations.

The most recent data on national organizations are from a study that was conducted by the Centre for Research on Civil Society and Voluntary Sector in 2013. The study was aimed at all types of nationwide associations, which included the organizations’ central divisions, stand-alone organizations, umbrella organizations, and Norwegian branches of international organizations. Nonprofit organizations that carry out welfare services were not included. After an adjustment of the gross sample and filtering of the submitted forms, it was determined that 933 organizations out of 3395 had responded.4 This gave a final response rate of 27.5% for the study.

To examine changes on the national level, we have linked the more recent data to older data stemming from studies conducted in 1983 and 1992 as part of projects at the universities of Tromsø and Bergen. The studies are included in several Norwegian organization studies that have been conducted over several decades. The data are provided by the Norwegian Social Science Data Services (NSD 2005).

The gross sample consisted of a total of 1648 organizations in 1983, of which complete answers were given from 1127, which gives a response rate of 68.4%. In the subsequent study from 1992, the gross sample was expanded to a total of 2427 organizations, and responses were received from 1005, giving a response rate of 41.4%. Based on information from the more recent study, there is much to suggest that there existed several relevant organizations at both time periods that were not included but which we include in our analyses of the population level.

Weights have been developed to correct disparities in the samples based on organizational categories (and register data on the number of employees in 2013).

Data on Local Organizations and Associations

The first survey of local organizations in Hordaland was completed in 1980 as a collaborative project between the University of Bergen and the Culture Department of the county administration. Since then, surveys have been conducted as part of the Hopkins project in 1999 by the Norwegian Research Centre in Organisation and Management (LOS) and the Institute for Social Research (ISF) and in 2009 by the Centre for Research on Civil Society and Voluntary Sector.

As part of a census, information has been registered on organizations and associations in most municipalities in Hordaland County, including Bergen (with the exception of the first round).5 The types of organizations that are excluded in all surveys are music schools, parent councils, parish magazine, parish councils, mountain boards, secondary school commencement boards, councils for the elderly, deer hunting grounds, and sports schools. In the most recent survey, it was also decided to remove housing cooperatives from the material because it proved difficult to get answers from them.

All registered groups and associations were sent a questionnaire in each round. To ensure comparability of data, a virtually identical questionnaire was used in all three studies. Any changes that were made had to do with the addition of new questions rather than changes to the existing formulation of questions.

For estimation purposes, we distinguish between the major city of Bergen and large, medium, and small rural districts based on the number of inhabitants. We have chosen to include only municipalities where adequate registration was done in all three rounds and where a relatively high response rate was achieved. Because there is data available only for the rural municipalities for all 3 years, the analyses will be based on this material, unless otherwise noted in the tables.

The Reliability and Applicability of the Data

With respect to the older data about national organizations, we know that these have flaws that make it difficult to obtain full information about certain organizations. We therefore have inspected the data carefully to identify potential entry errors and obtained information from other available sources to fill in missing information, either from the organizations’ websites or from encyclopedia entries in cases where the organization has ceased to exist.6 Despite these measures, there will still be organizations that we lack data on for one or more variables.

Such flaws may also be applicable to the newer organizational data, but we have far better knowledge of the collection process in this case. For example, there are some organizations that we lack complete information about because they eventually declined to answer the questionnaire. To the extent it is reasonable, we use the information that is available from the studies rather than removing the pertinent information from the data. Moreover, we cannot rule out errors in the registry data linked to the questionnaire data afterward, even though we have verified the information to the extent there was time and capacity to do so.

One strategy for rectifying the missing data when it more specifically pertains to figures for revenues and operating costs has been “multiple imputation” (Rubin 1987). This is a technique for analyzing missing data which produces more valid results than other traditional forms of imputation (such as, e.g., inserting mean values). The condition for being able to do such an analysis is that it is random whether the data is missing or not. We believe that this criterion in our case has been met. The main idea is that a series of imputed values are calculated which ​​then are “pooled” together and form the basis for calculating the average of the relevant variables that have missing data.

When it comes to using the data on local organizations from Hordaland as a basis for describing the development of the organizational community more generally, this presupposes an assumption that Hordaland may be considered to be a Norway in miniature form. The population of the county is divided into smaller rural municipalities, towns, and a major city, which reflects the geography of the population for the country as a whole and provides a good basis for estimates. At the same time, the distinctive features of organizational life in Hordaland and Bergen must be taken into consideration, which means that we cannot be 100% certain that what we observe is true for the rest of Norway.

Religious and life-stance organizations are somewhat overrepresented, as they traditionally have been stronger in Hordaland than many other places in Norway due to the influence of the lay Christian movement. There are also many local organizations within choirs, singing and music, along with agriculture, wilderness, and fishing in the rural municipalities. Second, Bergen constitutes a greater share of the population in Hordaland than similar major cities do in the rest of the country, while a smaller proportion of the county’s population lives in large municipalities. These differences notwithstanding, the Hordaland surveys represent the most comprehensive existing source on Norwegian local voluntary organizations.