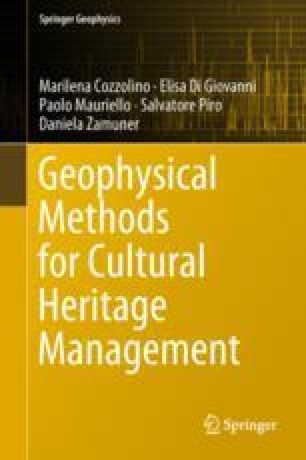 The second part of this book is focused on the application of the different geophysical methodologies - Geoelectrical, Ground Penetrating Radar and Electromagnetic - to Cultural Heritage, both in Italian and foreign sites. In order to highlight the various possible applications, the case studies, related to the most frequent diagnostic surveys, have been divided into main topic: Monuments, Historical Buildings, Urban Centres, Archaeological Parks, Preventive Archeology and Ancient viability.

Two case studies, the Treasury Tomb in the Archaeological Park of Petra, Jordan and the Abbey of Santa Maria a Mare, San Nicola Island, Tremiti (Foggia, Italy), concern the important and innovative research issue related to integration of 3D metric survey and geophysical prospection. Finally, the case study of Molise Region (Italy) provide a scientific contribution to the integration of geophysical prospections with the most modern data collection (Geographical Information System).

Each case study is composed by an introduction that describes the historical-archaeological context; the survey planning that explains both the methodological approach and the data acquisition and the last subsection with the discussion of data processing and results. Detailed figures complete the respective text sections.