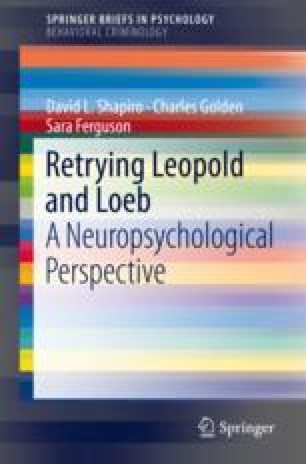 Clarence Darrow was a towering figure in the world of law, defending the indefensible, fighting to save many people from execution because of the sheer weight of his convictions and the eloquent way in which he expressed them. Recall that in this case, Darrow decided that strategically he could not utilize the expert testimony as the basis for his final argument. While the experts were distinguished psychiatrists, none were able to reach a causal nexus between the mental disorders and the crime, such that they could testify that because of mental disease or defect, Leopold and Loeb could not appreciate the wrongfulness of their behavior (the criteria for an insanity defense). The very extensive planning, the demands for ransom and the attempts to cover their tracks, all spoke to a complete understanding of the wrongfulness of their behavior. It was for this reason that Darrow chose not to pursue an insanity defense and entered guilty pleas on their behalf, thereby attempting to use the expert testimony as mitigation. Darrow had a shot at this, since Judge John Caverly had a reputation as a serious, scholarly individual who was liberal in his judicial philosophy. However, once again, if he used the expert testimony, he would still have to demonstrate how the mental disorders resulted in a compulsion to commit the crime or, at the very least, demonstrate how the factors in Leopold and Loeb’s backgrounds led to the specific crime. Darrow was unable to see the connection and was afraid that Judge Caverly would not either. (In fact, Darrow was correct in that Caverly made only passing reference to the mental condition of the defendants and chose to sentence them to life imprisonment rather than to death.) However, what would have happened if Darrow knew about the neurological basis of delusional disorder and psychopathy that we now know? Recall that Darrow, being a determinist and not believing in free will, had actually set the stage for this very type of testimony. He said of Loeb, “One of two things happened to this boy; that this terrible crime was inherent in his organism, and came from some ancestor, or it came through his education and training after he was born… I do not know what remote ancestors may have sent down the seed that corrupted him, and I do not know through how many ancestors it may have passed until it reached Dickie Loeb. All I know is, it is true, and there is not a biologist in the world who will say I am not right… Is Dickey Loeb to blame because out of the infinite forces that conspired to form him, the forces that were at work producing him ages before he was born, because out of these infinite combinations he was born without [emotional capacity]? … Is he to blame for what he did not have and never had? Is he to blame that his machine is imperfect?”