Contemporary Philosophical Proposals for the University 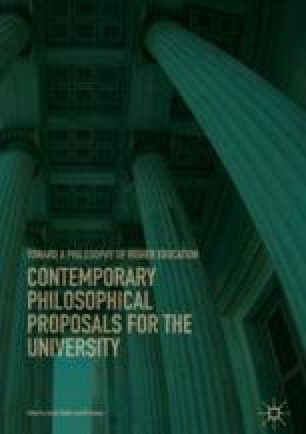 Contemporary Philosophical Proposals for the University pp 81-102 | Cite as

En Route: Toward a Philosophy and Practice of Liberal Education

Brazilian educational philosopher, Paulo Freire, defined praxis as “reflection and action directed at the structures to be transformed.” The structures to which Jackson Newell has directed his reformist energy throughout his career have been the aims and methods of liberal education, by which he strives to free students to pursue knowledge and serve the public interest without being blinded by preconceived ideological, political, or religious assumptions. His pedagogy has grown across a lifetime of wide-ranging experiences, academic inquiry, constant experimentation, and reflection. In this essay Newell describes how he leads students through their own encounters with concrete experience, intellectual and ethical exploration, and even spiritual discovery, to become free and responsible moral agents in their own right. He argues that this is the most direct way in which a college education becomes a public good.

L. Jackson Newell is professor emeritus of the history and philosophy of higher education at the University of Utah, former dean of Liberal Education at that institution, and president emeritus of Deep Springs College in California. He currently teaches in the Honors College at the University of Utah and was awarded the Distinguished Honors Professorship in 2016, at the age of 78. He has drawn from several previously published writings to present this, the most comprehensive statement of his philosophy of liberal education.