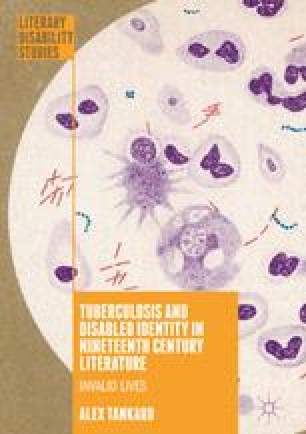 Victimhood and Death: Consumptive Stereotypes in Fiction and Non-fiction

Even if religious and Romantic cultural stereotypes were not inherently dehumanising, could they be chosen or rejected freely? Were dying consumptives—physically, financially, and socially dependent on their families and religious ministers—ever pressured to conform to those ideals of pious resignation? Was a consumptive’s ingratitude or impiety ever accepted, or their protest acknowledged?

This chapter begins to explore these questions by analysing life-writing about two consumptive artists at opposite ends of the nineteenth century: poet John Keats (1795–1821) and artist Aubrey Beardsley (1872–1898). Both died of tuberculosis at the age of 25, and Beardsley was frequently compared with Keats. Whether he welcomed this comparison is another matter entirely.

Consummate Artist Pious Resignation Consummate Genius Disability Consciousness Nicholas Nickleby
These keywords were added by machine and not by the authors. This process is experimental and the keywords may be updated as the learning algorithm improves.
This is a preview of subscription content, log in to check access.