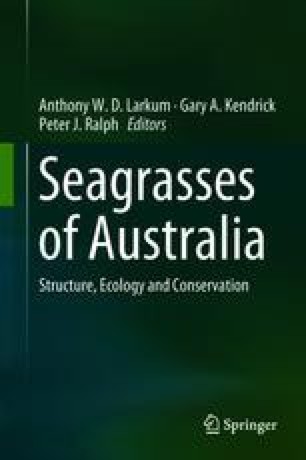 The editors take the opportunity to include as an Appendix a “Taxonomy of Australian Seagrasses”, which sets out a taxonomy based on classical taxonomic criteria. Molecular techniques have provided a new way of classifying organisms and this has happened to some extent with seagrasses. Chapter  5 presents much of this recent evidence and discusses the issues. Of particular relevance here is the issue over the previous seagrass genus Heterozostera (Zosteraceae). According to some experts, Heterozostera cannot be supported any more and should be merged into the genus Zostera (see Les et al. 2002; Jacobs and Les 2009). Les et al. (2002) looked only at Heterozoster tasmanica, and concluded that it should be transferred to Zostera as a sub-genus, Heterozostera. However, Jacobs and Les (2009) assumed that Heterozostera tasmanica was so difficult to separate from the other two Heterozostera species, that they chose not to recognise it as a separate species, leaving only Z. nigricaulis and Z. polychlamys as legitimate Australian species. If this were followed there would be 3 new Zostera species, Z. chilensis (from Chile), Z. nigricaulis (formerly Heterozostera nigricaulis and H. tasmanica; from Australia) and Z. polychlamys, (formerly Heterozostera polychlamy; from Australia) all of which would be placed in the sub-genus Heterozostera. This new approach has not been adopted by all Australian authorities but the International Plant Name Index prefers not to recognise the genus Heterozostera. Some workers, including the authors of the Appendix still advocate Heterozostera tasmanica.