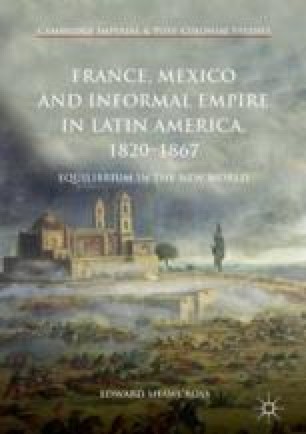 The 1850s saw the consolidation of Mexican conservatism. Chapter  5 explores the worldview of the Mexican Conservative Party, particularly as it was shaped by international events and transnational currents of thought. The period 1848 to 1861, bookended by the US-Mexican War and the French intervention, has seen historians focus on domestic Mexican politics, particularly the struggle between ”reactionary” Conservatives and “progressive” liberals culminating in the War of Reform. However, the chapter argues that those associated with the Mexican Conservative Party understood themselves to be part of an international reaction against the doctrines that, they believed, caused the 1848 revolutions in Europe and contributed to instability in Mexico. In searching for a model to inspire their dream of turning a tumultuous democratic republic into an orderly authoritarian state, the newly formed Mexican Conservative Party looked to the French Second Empire. The chapter analyses the response of Mexican Conservatives to the 1848 revolutions in the aftermath of the US-Mexican War (1846–48). It argues that Mexican Conservatives placed themselves within an international struggle of global importance—a Western version of the Crimean War. In drawing upon the renewed intellectual vigour of conservatism in the late 1840s and 1850s, Mexican conservatives developed a conservative path to modernity, which emphasised order and progress over political liberty and democracy, but nonetheless incorporated many elements of the so-called “spirit of the century”.