Fable, Method, and Imagination in Descartes 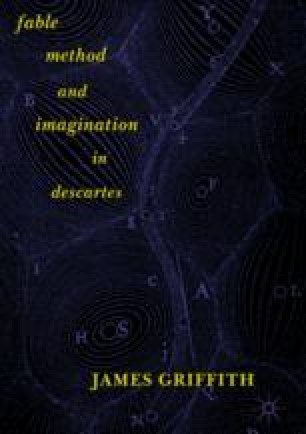 This work has considered the effect that attending to Descartes’ use and mention of the fable has on conceptualizations of Cartesian method and imagination. Attending to the fable, especially insofar as establishing a fable-structure or -logic, needed to occur first. Only once it has become clear that the fable is a rhetorical device at work throughout the Cartesian corpus, one which runs to the inaugural points of Cartesian philosophy proper, can the method become understood as interwoven with the synthetic and syllogistic elements which Descartes otherwise disdains. That these synthetic and syllogistic elements operate in the service of a fable which allows for the imagining of a new world, new human beings, and the possibility of learning as such shows that the imagination’s role is more complicated than even Descartes would seem to have himself believed. The fable-structure or -logic at the heart of Descartes’ work and the attending to which exposes the method as more complicated than it appears is possible only because the imagination is able to exceed the bounds which it sets for itself. This exceeding is what makes the imagination neither a metaphysical nor a transcendental faculty. It is not metaphysical because there is always an element of the finite in it—it is not infinite in the way the will is. It is not transcendental because it does not establish the conditions for the possibility of experience for the other faculties. The imagination, as excessive of itself, moves, shifts, transitions between the finite and the infinite. This is what is meant by calling it a transfinite faculty. It accomplishes this transfinite movement by means of a fable, and especially those fables that imagine new worlds and new humans that coincide with how they have been experienced. Yet, to make sense of this understanding of the imagination, it was necessary to affect, to cause a change in the understanding of the method such that an analytic reduction is never taken for a reduction to simples in the way that Descartes, or at least Cartesians, assumed. Seeing that the method is never precisely methodological, but is always split in at least two directions, is always schismatic—whether in reference to readers, to history, or to oneself—is most clearly and distinctly achieved through attending to the language and meaning of the concept of the fable for Descartes.