Counter-Terrorism from the Obama Administration to President Trump 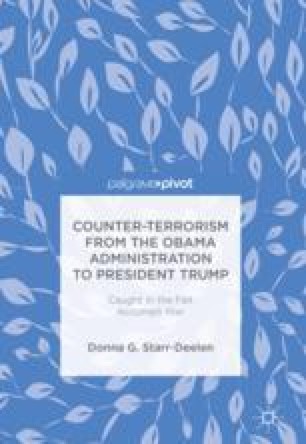 The Obama Administration and Syria

The Syrian civil war is examined, along with the use of chemical weapons on civilians in Syria. President Obama’s “red line” statement about Syria in 2012 regarding the use of chemical weapons and how he sought congressional authorization in 2013 are discussed. Starr-Deelen analyzes the domestic legal questions by referring to the historical record concerning the Founding Fathers, defensive uses of force, and the role of Congress in authorizing offensive war. The chapter also explores the international law questions, including articles 2(4) and 51 of the UN Charter, involved in a potential military strike by the US against Syria.

Syria Use of force Articles 2(4) and 51 UN Charter Self-defense Chemical weapons Chemical Weapons Convention
This is a preview of subscription content, log in to check access.