The Criminal Victimization of Immigrants 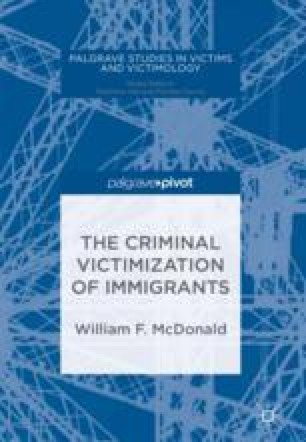 The Criminal Victimization of Immigrants pp 1-10 | Cite as

The Immigrant as Victim: The Minimal Research

Despite the common observation that immigrants are frequently victims of crimes, research on the topic has been limited in part due to the lack of good data and in part because claims makers have constructed the problem in other, more socially and politically compelling terms: “modern slaves;” trafficking victims; domestic violence; hate crime; child abuse and elder abuse. Another aspect of the problem is that the concept “immigrant” over-aggregates, lumping into one category people with widely differing characteristics. Victimologists have approached the subject from distinct traditions: the humanistic/human rights vs. the positivist or “conservative.”

Criminological research on immigrants has been primarily concerned with the criminality of immigrants. Less concern has been paid to immigrants as victims of crime In his review of the literature, for instance, Satyanshu Mukherjee of the Australian Institute of Criminology concluded that “apart from hate crime, there has been little concern in criminal victimization of immigrants.”1 This comes as no surprise given that in 1967 the President’s Commission on Law Enforcement and Administration of Justice declared that “one of the most neglected subjects in the study of crime is its victims.”2 Although the pioneer victimologist Hans von Hentig , himself an immigrant, devoted substantial attention to the depredations inflicted upon immigrants by criminal and unscrupulous predators,3 until recently victimologists have not pursued that topic.4 Virtually nothing more was done until the Fifth International Symposium on Victimology in 1985. Even then there was not much about immigrant victims.5

The lack of interest in the topic is surprising given what was known about immigrants and foreigners. For example, von Hentig observed that “[t]here is a tendency all over the world to make the foreigner bear blame for others. Their different appearance, their poverty, the life in the slums, all render them suspect.”6 And Stephan Schafer, another early victimologist , explained that immigrants are like “ethnic minorities, and others who are in a socially weak position [and so] are often exploited by the criminal element.”7 By the time Biko Agozino of the School of Science, Liverpool, began writing about the subject, the immigrant was seen in a more complex way. He wrote,

These days stories about the criminal victimization of immigrants are daily fare in the media. A Maryland legislator tells the press, “[i]t bothers me to see how our (immigrant) community is victimized by so many fraudulent scams.”9 Similarly, a former German police officer says, “You don’t find foreigners on the streets in eastern Germany past 6 or 8 p.m. In the villages, it’s difficult for the police because often their own sons are involved in the violence… And the rightists have some sympathizers among the police. I’ve heard police say, ‘All foreigners are criminals, and the young people help us keep the countryside clean.’”10

An article from a New York City paper reports that “assaults in which perpetrators are people of color have become more common—and victims tend to be immigrants from every imaginable origin. The change is a matter of sheer demographics.”11 An article from the Head of the Forced Migration Studies Program at Witswatersrand University, South Africa reads: “Xenophobia is turning immigrants into ‘mobile ATMs’ for police and criminals who see them as a source of instant cash.”12 A news service story about illegal immigrants traveling from Central America through Mexico to the USA describes the trip as like the running of a brutal gauntlet in which everyone—good, bad, or indifferent—takes the opportunity to victimize the immigrants.

The journey is extremely dangerous. The stories these seven men tell highlight the perils faced by the hundreds of Guatemalans, Hondurans, Salvadorans and others who begin the trip every day. The men in the shanty say that since they entered Mexico at the southern state of Chiapas a few days earlier, they have seen or experienced just about everything: Some have been beaten, forced to pay bribes, robbed by law enforcement officers, ripped off by shopkeepers and bus drivers, cheated by smugglers, ambushed and mugged by gun-toting bandits.13

Nowhere is free from the abuse of immigrants, even in a nation of immigrants. In 1957, for example, the Australian Commonwealth Immigration Advisory Council wrote the following:

A not unimportant matter that was mentioned by a number of Police Officers in each of the States was that, whilst undue publicity was given to the offenses alleged to have been committed by migrants, little or nothing was said of the many instances when European migrants had been assaulted or robbed or otherwise ill-treated by the undesirable sections of our own native-born populations.14

The minimal research on the victimization of immigrants is undoubtedly related in part to the difficulty of obtaining valid data on the immigration status of crime victims. Information about crimes against immigrants is mostly anecdotal coming from media reports or the experiences of immigrant service providers. There are virtually no official crime statistics on this matter of the criminal victimization of immigrants in the USA15 or Australia.16 Such data are available in several European countries. However, their validity and reliability are open to question.17

Another reason for the lack of a focus on immigrants qua immigrants as victims is what researchers working within the social constructionist tradition would describe as the process of defining victim categories and of “making claims”18 on behalf of those categories. Victim-activists have been remarkably successful at placing a variety of victim categories and victim issues on the public agenda, including elder abuse,19 hate crime,20 child abuse,21 domestic abuse,22 and crime against the elderly.23 The fact that they have not cast “immigrants” in the role of “star victim”24 does not necessarily mean that concern about immigrant victimization does not exist at all. Rather, it is because certain immigrant troubles have been subsumed under politically hotter topics, such as hate crime, domestic violence and human trafficking.25

Indeed, one of the most successful claims-making campaigns on behalf of victims of crime ever mounted is about an “immigration” issue. However, it has been packaged under the far more politically potent rubric of “the trafficking of human beings .” The star role in this campaign has been a classic example of what Nils Christie called the “ideal victim,” i.e., “a person or category of individuals who—when hit by crime—most readily are given the complete and legitimate status of being a victim.”26 Like Hiram Powers’ famous sculpture, The Greek Slave,27 the image of the innocent girl abducted to a foreign land and forced into sexual slavery by depraved and lustful men became a household icon, the image of the innocent girl being trafficked off to a foreign land to be debauched has been used to successfully galvanize support for the anti-trafficking cause.28

Related to this second reason for the lack of research on immigrants as victims of crime is the fact that the concept “immigrant” over-aggregates matters. Unlike traditional demographic variables such as gender, age, race/ethnicity, social class, and urban vs. rural residence, the status of being an immigrant does not represent a singular dimension of social status or experience. Any review of what is known about the victimization of immigrants by necessity must expect to find the literature subdivided into more specialized categories such as hate crime, domestic violence and trafficking of humans.

It must also be recognized that since the 1960s much research related to immigrants no longer focuses upon immigrant status as it did in the early twentieth century in the United States. These days the terms, race, ethnicity, and immigrant are used virtually interchangeably. Thus, in Europe and Australia official data on hate crime and crime victimization surveys that ask about race and ethnic information are presumed to be proxy measures for crimes against immigrants—even though the victims may be second or third generation. It also bears mentioning that since the war in Yugoslavia and the collapse of Soviet communism, the term “immigrant” (especially in Europe) is often used synonymously with that of refugee or asylum seeker.

When victimologists/criminologists have focused on immigrants as victims of crime, they have sometimes followed the humanistic/human rights (as opposed to the positivist or so-called “conservative”) tradition in victimology.29 They have not limited their analyses solely to victimizations involving crimes in the technical, legal sense.30 Rather they define “victimization” broadly to include civil matters, such as unfair business or labor practices31; discriminatory behavior by the police and the criminal justice system32; discriminatory labor standards and laws that put farm workers and illegal immigrants at high risk of physical injuries or loss of wages33; harsh and stingy asylum and refugee policies34; and “the criminalization of immigration controls.”35

It should be noted that the American lack of research on immigrants as victims of crime is unlikely to be reversed by the Donald Trump administration. Actually at his first address to Congress, President Trump promised to have immigrants studied as the cause of crime.36 In addition to describing the development of victimology and its reasons for not focusing much on immigrants, this chapter describes the endless types of crimes and injuries which immigrants suffer. It also reviews theories of victimization at both the macro and micro levels, showing that they fit the patterns in the data rather well. However, it also highlights an inconsistency between the macro -level explanation which emphases heterogeneity (ethnic differences among groups as a cause of conflict) and the micro-level explanations that stress homogeneity (the lifestyles shared in common and the fact that immigrants are usually victimized by their own kind).

These two perspectives and the data behind them seem to both support and challenge at the same time the popular idea that ethnic enclaves protect immigrants from victimization. Yes, enclaves do seem to protect immigrants from victimization by outsiders but not by insiders. That is, enclaves reduce heterogeneity within them and thereby reduce the chance of so-called “hate crime” (victimization motivated by differences in culture, religion, nationality, ethnicity). But enclaves also increase homogeneity which means that immigrants are living together with other immigrants and co-ethnics. That situation increases the risk of being victimized by fellow immigrants and co-ethnics, which is precisely what the data show happening and what the opportunity theories predict. This conclusion is supported below.