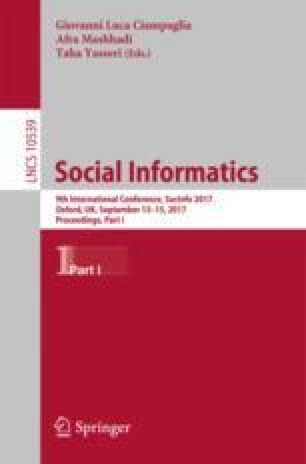 An Analysis of Individuals’ Behavior Change in Online Groups

Many online platforms support social functions that enable their members to communicate, befriend, and join groups with one another. These social engagements are known to shape individuals’ future behavior. However, most work has focused solely on how peers influence behavior and little is known what additional role online groups play in changing behavior. We investigate the capacity for group membership to lead users to change their behavior in three settings: (1) selecting physical activities, (2) responding to help requests, and (3) remaining active on the platform. To do this, we analyze nearly half a million users over five years from a popular fitness-focused social media platform whose unique affordances allow us to precisely control for the effects of social ties, user demographics, and communication. We find that after joining a group, users readily adopt the exercising behavior seen in the group, regardless of whether the group was exercise and non-exercise themed, and this change is not explained by the influence of pre-existing social ties. Further, we find that the group setting equalizes the social status of individuals such that lower status users still receive responses to requests. Finally, we find, surprisingly, that the number of groups one joins is negatively associated with user retention, when controlling for other behavioral and social factors.

Online Group User Retention Exercise Behavior User Demographics Join Groups
These keywords were added by machine and not by the authors. This process is experimental and the keywords may be updated as the learning algorithm improves.
This is a preview of subscription content, log in to check access.

We thank the reviewers for their insightful and detailed comments, with special thanks to Reviewer 3 for their nuanced analysis. The first author would also like to thank Tim Althoff, Will Hamilton, and Jure Leskovec for their helpful discussion and feedback. Finally, we thank the Fitocracy developers for creating their platform and making it accessible to all.

The classification of user question on social search and applied in Sect. 4, adapted from Ellison et al. [27] and Morris et al. [62]

Social variables include the user’s gender, age, level, number of followers, number of friends, and the number of times the user has asked this audience a question previously. Text features are partially drawn from the setup for Althoff et al. [2], which examined requests for favors on Reddit. We measure the overall politeness of a request with the model of Danescu-Niculescu-Mizil et al. [23]. To capture broad content variations, we (1) train a 20-topic LDA model [13] to generate a distribution of topics for each question, described in Appendix B, Table 9 and (2) count the relative frequency of word categories from the Linguistic Inquiry and Word Count (LIWC) [79] lexicon. Question sentiment is measured using word frequencies from the NRC sentiment and emotion lexicons [48, 60]. Finally, we include the relative frequency of hedges and modals in the question [39].

The mixed-effect logistic regression was constructed using step-wise variable deletion, which removed the variable with the highest variance inflation factor (VIF) until all variables had a VIF < 5. This process removed 9 variables all of which were LIWC lexical categories. The final model had 94 variables.

The most probable words for the topics used in predicting whether a question receives a response using the mixed-effect regression analysis in Table 2. Topics regression coefficients are reported in Table 8.