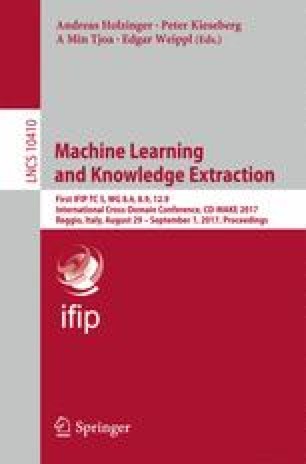 Most Machine Learning techniques traditionally rely on some forms of Euclidean Distances, computed in a Euclidean space (typically \(\mathbb {R}^{d}\)). In more general cases, data might not live in a classical Euclidean space, and it can be difficult (or impossible) to find a direct representation for it in \(\mathbb {R}^{d}\). Therefore, distance mapping from a non-Euclidean space to a canonical Euclidean space is essentially needed. We present in this paper a possible distance-mapping algorithm, such that the behavior of the pairwise distances in the mapped Euclidean space is preserved, compared to those in the original non-Euclidean space. Experimental results of the mapping algorithm are discussed on a specific type of datasets made of timestamped GPS coordinates. The comparison of the original and mapped distances, as well as the standard errors of the mapped distributions, are discussed.

Traditionally, most data mining and machine learning have relied on the classical (or variations thereof) Euclidean distance (Minkowski distance with the exponent set to 2), over data that lies in \(\mathbb {R}^{d}\) (with \(d\in \mathbb {N}_{+}\)). One problem with this approach is that it forces the data provider to process the original, raw data, in such a way that it is in \(\mathbb {R}^{d}\), while it might not be natural to do so. For example, encoding arbitrary attributes (such as words from a specific, finite set) using integers, creates an underlying order between the elements, which has to be carefully taken care of. It also creates a certain distance between the elements, and the various choices in the conversion process are practically unlimited and difficult to address. We therefore look here into the possibility of not converting the data to a Euclidean space, and retain the data in its original space, provided that we have a distance function between its elements. In effect, we “only” require and concern ourselves, in this paper, with metric spaces, over potentially non-Euclidean spaces. With the fact that most data mining and machine learning methods rely on Euclidean distances and their properties, we want to verify that in such a case, the distances in a non-Euclidean metric space can behave close enough to the Euclidean distances over a Euclidean space. The reasoning behind this is that traditional Machine Learning and Data Mining algorithms might expect the distances between elements to behave in a certain manner, and respect certain properties, which we attempt to mimic with the following distance mapping approach.

Distance-mapping algorithms are a useful tool in data applications, for example, data clustering and visualisations. Another good use case for distance-mapping, is mutual information [3, 7, 10], which is used to quantitatively measure the mutual dependence between two (or more) sets of random variables in information theory. Mutual information is most often estimated by constructing the k-nearest neighbors [7, 10] graphs of the underlying data, which thus rely on the Euclidean distances. Hence, there is a strong need to re-calculate the distances over a potentially non-Euclidean space.

In the following Sect. 2, we first introduce basic notations to describe the distance mapping approach in Sects. 3, 4 and 5. After a short discussion about important implementation details in Sect. 7, we finally present and discuss results over a synthetic data set in Sect. 8.

We propose to use Machine Learning (more specifically, Universal Function Approximators [4]) to map the distribution \(f_{\varvec{z^{(j)}}}\) of the non-Euclidean distance to the distribution \(f_{\varvec{z^{(i)}}}\) of the Euclidean distance, with the fact that most Machine Learning techniques are able to fit a continuous input to another different continuous output.

The following Sect. 5 describes in practice the algorithm to achieve the distance mapping proposed.

To calculate the integral in the left part of Eq. 3, we first need to construct the distribution function \(f_{\varvec{z^{(j)}}}\) using Machine Learning for functional estimates. The algorithm for distance mapping is explained as follows:

Use a Machine Learning algorithm to learn this histogram: this creates an un-normalized version of \(f_{\varvec{z}^{(j)}}(t)\);

Normalize the estimated function from 4. with the constant \(\varvec{C}^{(j)}\);

So, we are presented with two possibilities:

In the case of \(\mathcal {X}^{(i)}\) being the canonical Euclidean space, we can find analytical expressions for \(f_{\varvec{z}^{(i)}}\) in Eq. 3, by making assumptions on how the variables \(\varvec{x}^{(i)}\) and \(\varvec{y}^{(i)}\) are distributed. If such assumptions are not acceptable for some reason, it is always possible to revert to the estimation approach mentioned above, or possibly solve analytically as below for other well-know distributions.

We propose to use Extreme Learning Machines (ELM) [5, 6] as the mapping tool between distance functions. The reason for choosing this specific Machine Learning technique is its excellent performance/computational time ratio among all the techniques. The model is simple and involves a minimal amount of computations. Since we are dealing with the limit problem of the number of records N to estimate the distribution \(f_{\varvec{z}^{(j)}}(d)\) (in Eq. 2), the ELM model is applicable in that it can learn the mapping in reasonable time for large amounts of data, if such a need arises. ELM is a universal function approximator, which can fit any continuous function.

The ELM algorithm was originally proposed by Guang-Bin Huang et al. in [6], and further developed, e.g. in [8, 9, 12], and analysed in [2]. It uses the structure of a Single Layer Feed-forward Neural Network (SLFN) [1]. The main concept behind the ELM approach is its random initialization, instead of a computationally costly procedure of training the hidden layer. The output weights matrix is then to be found between the hidden representation of the inputs and the outputs.

The ELM training does not require iterations, so the most computationally costly part is the calculation of a pseudo-inverse of the matrix \(\varvec{H}\). This makes ELM an extremely fast Machine Learning method. Thus, we propose to use ELM to learn the distribution of the pairwise distances over non-Euclidean spaces \(f_{\varvec{z}^{(j)}}(t)\) or \(F_{\varvec{z}^{(j)}}(t)\).

In the following Sect. 8, we present results over the typical data used for this work, GPS traces (latitude and longitude).

We have tested the proposed mapping algorithm by mapping the pairwise distances in the dataset of GPS coordinates in the form of latitudes and longitudes, which is shown as the trajectory in Fig. 1. Assume we have a dataset \(\varvec{X} = [\varvec{x_1},...,\varvec{x_N}]^{T}\) to depict the trajectory of one specific person, where the attributes of each record \(\varvec{x_i}\) explain the locations by latitude and longitude coordinates at the corresponding time \(\varvec{t_i}\).

We have developed and implemented a distance-mapping algorithm, which projects a non-Euclidean space to a canonical Euclidean space, in a way that the pairwise distances distributions are approximately preserved. The mapping algorithm is based on the assumptions that both spaces are actual metric spaces, and that the number of records N is large enough to estimate the pairwise distances \(f_{z^{(j)}}\) (or \(F_{z^{(j)}}\)) to be close enough to \(f_{z^{(i)}}\) (or \(F_{z^{(i)}}\)). We have tested our algorithm by illustrating the distance mapping of an experimental dataset of GPS coordinates. The limitation condition of N is discussed by the comparison of \(F_{z^{(j)}}\) and its mapped \(F_{z^{(i)}}\), using various N values. The standard errors of the mapped distance distribution \(F_{z^{(i)}}\) is also analyzed with various N.

Our distance mapping algorithm is performed with the most common canonical Euclidean distance distributions. Certainly, less common distributions are needed to be implemented as well, and might require specific adjustments. More diversified experimental examples are needed for completeness.