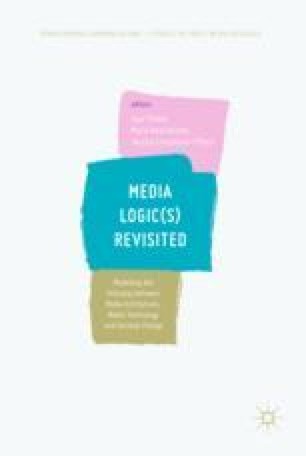 This article is a revised and shortened version of the first two chapters in the book: “Medialisering: Mediernes rolle i social og kulturel forandring” [“ Mediatization : The Role of Media in Social and Cultural Change ”], edited by Stig Hjarvard, Copenhagen: Hans Reitzels Forlag, 2016.

This article has discussed the role of media logics within mediatization theory . As such, the presentation has been kept on a general and conceptual level. An empirical analysis of mediatization processes would have to be more specific and focused, taking into account the real-life context in which the interaction between media, culture and society takes place . As argued elsewhere (Hjarvard, 2014a), it is an advantage to conduct analyses of mediatization at middle-range level (Boudon, 1991; Merton, 1968). This is defined as a level of generalization that lies between the macro and micro levels. It is characterized by, on the one hand, the desire to generalize beyond purely local and particular contexts and to develop models and concepts for features that transcend different local contexts. On the other hand, it entails a commitment to ground theoretical concepts and models by empirical evidence and retain a degree of skepticism regarding excessively generalizing claims about developments in society as a whole. At the middle-range level, it is possible to be theoretically ambitious in terms of devising models for trends in a given area and to conduct an empirical analysis of the actual conditions in the specific area. This also includes the identification of particular media logics, understood as rules and resources of the media, that in combination with other social logics may evoke social and cultural change as well as new conditions for communication and interaction .

Analyses of the mediatization of culture and society must, therefore, be historically sensitive and take into account the cultural and social context of a given area, e.g., politics , family , education . Existing analyses have largely been dominated by European and Scandinavian perspectives. Thus, there is a real need to evaluate the role of the media in social and cultural change in other contexts, such as in Latin America and Asia. A number of media have now a global presence but there are significant variations in the ways in which they influence culture and society —and are themselves affected by this process. As emphasized in this chapter, media logics also become influenced by the particular inter-institutional context in question. Comparative analyses of mediatization in different countries and social systems would help to identify similarities and differences in the media’s role in cultural and social change and how media come to condition social interaction .