Embracing 'Asia' in China and Japan 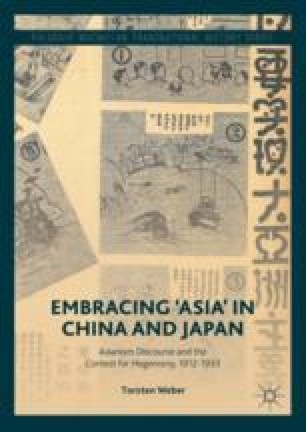 This chapter analyses the unfolding of Asianism discourse during World War One as a heated political debate involving a variety of Japanese and Chinese thinkers in search for a new formula for the post-war political order that would see the established Western powers decentred. World War One triggered the immediate and extensive spread of the concept in China and Japan and to many the war served as the assumed proof of a decline of the West. Although the War facilitated such debate to an unparalleled degree of plurality and diversity, resulting political activities remained scarce. Asianism, during the First World War, above all remained a theoretical enterprise; the concept represented a claim and a stream of thought but not yet a movement.

Asianism Discourse Tokutomi principlePrinciple Greater Asianism Asian Japanese
These keywords were added by machine and not by the authors. This process is experimental and the keywords may be updated as the learning algorithm improves.

If one says Greater Asianism is ambivalent, we shall insist it is extremely ambivalent. Its core part is yet undefined, and its point of departure is undecided. However, this ambivalence and vagueness is not at all the disease of our Greater Asianism. Isn’t it a characteristic of human thought that any claim becomes ambivalent if its range is enlarged? Indeed, any principle (shugi) in the initial phase of its movement inevitably rests in a stage of vagueness. 1