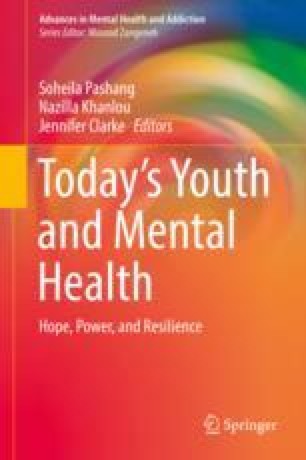 Youth Resilience and Social Capital in a Disadvantaged Neighborhood: A Constructionist Interpretive Approach

How resilience is conceptualized is central to resilience-building interventions. Informed by social constructionism and social capital theory, we explore the meaning of resilience for youth residing in a marginalized neighborhood in Canada’s largest metropolis. Data were gathered through separate focus groups held with male and female youth.

Participants shared viewpoints and experiences on what it means to grow up well (i.e., be/become resilient) in this neighbourhood and how they face challenges and try to keep healthy.

A constructionist interpretive lens supplemented by social capital theory informed key themes of participants’ perspectives and experience, including both conventional and distinctive understandings of resilience. On the one hand, attributes and common-sense strategies generally prevalent among adolescents were articulated, while on the other hand distinctive pathways of resilience in the context of disadvantage and marginality emerged.

Underscoring resilience as a phenomenon embedded in specific contexts and shaped by privilege and disadvantage, we argue for resources to support the resilience of marginalized youth.

I was a young single mother with three children, surviving horrific domestic violence and living in poverty in a marginalized community. Given that I grew up in a mainstream two-parent family, I was able to draw from my own resilience; with mentoring by a Children’s Aid Society worker and support from the community around me, I was able to secure employment and move forward with my life. As part of my early employment, I facilitated a group of teenage mothers called Teen Moms on the Move (TMM) for many years and later I initiated and supported a successful program called Women Moving Forward (WMF) that focused on breaking the cycle of poverty.

I was not surprised to learn that the information gleaned from the focus groups in this study is not different from my own experience and from the experience of women who participated in the Teen Moms or the WMF program. Both groups had young women who thrived in a group where there was trust, where they could access resources and share their difficulties and challenges. Women from both groups had frequent exposure to negativity, lacked trusting relationships, and perhaps had chosen friends from the “wrong crowds.” They all lived in marginalized communities where resources were limited and, in most cases, where expectations were low both at home and at school.

In 2008, I interviewed 22 women who were “graduates” of the TMM program between the period of 1992 and 2002. I was interested in hearing their points of view many years later. When they had attended the program, all were marginalized, living in poverty and in precarious housing situations. Many were either racialized or in a mixed-race relationship. It was clear from the interviews that being part of a group, having a sense of belonging, and being treated with respect and accepted was important to their maturation process. Information was also important to them so that they could make informed decisions.

When they were asked to respond to the statement, “I wish I had waited,” one of the women stated, “I wished I knew more about sex and birth-control. I would have stayed in school and taken education more seriously.” Another said that she would do the same thing over again; “I had a nasty temper before my baby, but I had to learn to control my temper. At 17, when I was 6½ months pregnant, I was in jail for attempted murder but charges got dropped. I stayed in school because of the child.”

In some cases, the child turned the young mom around but that is a lot of responsibility for a child, something that is clearly not their role. Society would have served this mother better had she been supported in a stable environment, at home, attending school, and living in her community. All the young women expressed that it was important to protect themselves by educating themselves about sex and sexuality. They expressed that the school system, through health education, did not delve into this topic to the degree that it should. They expressed the need for learning life skills-related subjects, learning about where to access information and support in overcoming their difficulties and challenges (MacNevin, 2008).

The Women Moving Forward (WMF) program further proved the importance of being in a group, and having a sense of belonging. After 2 years of prior research, including a literature review and focus groups with young women, the program was developed to include Life Skills, Career Planning, Citizen Participation, English Language Arts, and Group Counselling. To get into the program, women (ages 20–29) had to go through an intake process. Barriers routinely identified were housing, family conflict, mental health, indebtness, abuse (past and/or current), lack of support, and drug and/or alcohol abuse. The program was 10 months long. During the period of 2005–2010, WMF worked with 106 women where the retention rate was 75.5%. Five years into the program, after an extensive evaluation, we found that over 70% had improved their readiness to access resources independently; all the women had an action plan (goal oriented); 90% knew and understood their rights better and were better prepared to access social/government services; 83% felt more in control of their life and 94% felt more capable of dealing with life’s difficulties; and 83% of all women reported an increase in their financial knowledge and skills.

Both of the above programs (TMM, WMF) resonate with the definition of social capital theory in this paper. Women became part of a community where individuals got to know each other and where trust was developed (bonding); they learned about opportunities and gained access to other groups (bridging); and they gained access to resources and developed the capacity to leverage those resources (linking).

I strongly agree with the recommendations in this paper. Youth have a perspective based on their lived experiences. Their experiences need to be heard along with their ideas for overcoming marginalizing forces. Programs, with input from marginalized and racialized youth, must be developed with that input and must provide the needed support for them to participate (e.g., paid public transit fares to get to a program and childcare, if needed). Programs must have a focus on action and change, life skills, and leadership skills so that youth can experience their own transition within a reasonable amount of time.

Sustainable and secure funding is needed for programs that meaningfully benefit marginalized and racialized youth. TMM no longer exists due to a lack of funding and adequate resources to support the program. Likewise, the WMF program (not operating at this time) is on hold until adequate funding can be secured to run the program. There are programs like this in the City that have demonstrated evidence for providing youth with concrete and tangible assistance, but secure and adequate funding continues to be a challenge.

Education, skills training, well-paid jobs, and volunteer opportunities need to be a part of any youth program development. Longer-term research is needed so that we can further explore the impact of successful programs. This research needs to follow youth from their entry into a program, for the duration of the program, and then they should be interviewed 5–10 years later to fully understand the impact of successful programs on youth.

The issues young people face, particularly racialized youth living in low-income communities, are not new. We only need to implement recommendations from successful programs, have them adequately funded and appropriately researched for further learning.