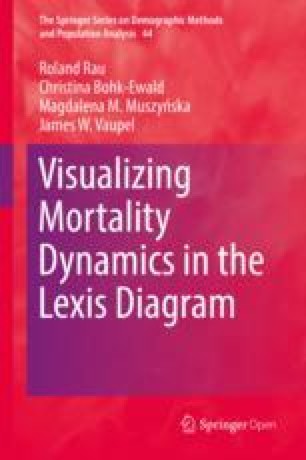 This chapter summarizes our main findings, it shows that the tools presented in this monograph can not only be applied to mortality but also to fertility, migration, or any kind of variable that can be classified by age and calendar time.

The goal of this monograph was to show a variety of possibilities to visualize mortality dynamics on the Lexis plane. While we provided examples of raw and smoothed mortality surfaces, our focus was on visualizing rates of mortality improvement (“ROMIs”), i.e., the derivative of age-specific death rates with respect to time. We provided ROMI examples for national populations covered by the Human Mortality Database as well as for selected causes of death in the United States. These “ROMI-plots” were quite instructive to detect period and cohort effects. We also illustrated how changes in age-specific mortality contribute to a gain (or loss) in life expectancy. In Chap. 9 we decomposed seasonal data for causes of death to investigate whether the seasonal pattern, measured via the amplitude and the peak moment (“phase”), has changed over or age. The previous chapter dealt with survival chances of persons who were diagnosed with cancer.

Despite the large number of figures, our list is obviously not exhaustive; here we want to provide a few more two ideas how the Lexis diagram can be used to illustrate not only mortality dynamics.

Figure 11.1 adapts our ROMI approach to fertility. The top panel contains a surface map of age-specific fertility rates in the eastern part of Germany. Birth counts and corresponding exposures by single year of age and calendar time were downloaded from the Human Fertility Database (2017). The estimates were (again) generated with Camarda’s R package for smoothing surfaces with P-splines (Camarda 2012, 2015). The lower panel shows rates of fertility improvement, where improvement means an increase in fertility. Thus, it is the opposite definition of mortality where a decline in mortality was interpreted as an improvement. It is already apparent in the upper panel that fertility dropped considerably a few years after reunification. In 1993 and 1994, the so-called total fertility rate dropped to 0.78 children per woman. This development corresponds to the dark, almost black, vertical area around 1990.1

The subsequent recovery of the total fertility rate can be traced back to a strong cohort effect as illustrated by the red, orange, and yellow triangular area starting in about 1995 at ages 25 and above. It is equally interesting that age-specific fertility of younger women (aged about 20–24) has not gone back to pre-reunification levels but continues to decrease. The figure also shows that a similar development of a sudden decline and recovery was experienced already in during 1960s and 1970s.

The last example we want to provide is for the third main parameter in demography: Migration. In Fig. 11.2 we depicted the smoothed age-profile of immigrations of men in Sweden. We estimated for each year from 1968 to 2016 the relative frequencies of each single age. The corresponding plot based on unsmoothed data is included in the appendix in Fig. A.16. We selected this plot because it shows that the age schedule of immigration movements is rather time-invariant—despite the increase of immigrants in recent years coming to Sweden. Male migrants during the past 50 years were typically 20 to 30 years old when they arrived in Sweden. There was virtually not a single year, when more than 1% at a single age of men, i.e., approximately the expected value of a uniform distribution over age, coming to Sweden were older than 45 years.

Using the Lexis diagram is not restricted to depict dynamics of populations. In principle any phenomenon that can be classified by age and calendar time could be illustrated. One example could be unemployment. We would argue that a plot created analogously to the ROMI-plots could easily reveal how labor market reforms may affect various age-groups differently.

We also would like to point out that a plot in the Lexis diagram is not the answer to any question related to population dynamics; for example, maps might be more suitable for spatial analyses or circular plots for migration flows as popularized among demographers by Abel and Sander (2014).

In the introductory chapter we wrote that the main reasons to visualize data can be summarized to be exploration, confirmation, and presentation. We assume that more exploratory analyses will be conducted in coming years using dynamic graphics as their generation is nowadays greatly facilitated by platforms such as node.js, for instance. Nevertheless, we remain confident that plots as the ones contained in this monograph will continue to serve as important tools in all three areas.

Open Access This chapter is distributed under the terms of the Creative Commons Attribution 4.0 International License (http://creativecommons.org/licenses/by/4.0/), which permits use, duplication, adaptation, distribution, and reproduction in any medium or format, as long as you give appropriate credit to the original author(s) and the source, a link is provided to the Creative Commons license, and any changes made are indicated.