Foundations of Mathematics and Physics One Century After Hilbert 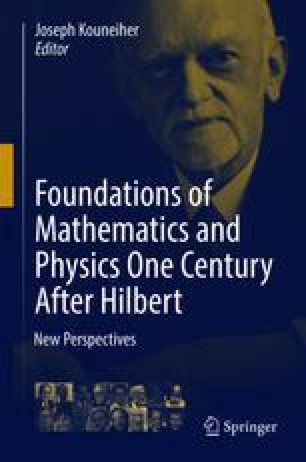 Geometry and the Quantum

The ideas of noncommutative geometry are deeply rooted in both physics, with the predominant influence of the discovery of Quantum Mechanics, and in mathematics where it emerged from the great variety of examples of “noncommutative spaces” i.e. of geometric spaces which are best encoded algebraically by a noncommutative algebra.

I am grateful to Joseph Kouneiher and Jeremy Butterfield for their help in the elaboration of this paper.

Here is a possible translation of the second quote of Grothendieck:

It must be already fifteen or twenty years ago that, leafing through the modest volume constituting the complete works of Riemann, I was struck by a remark of his “in passing”. He pointed out that it could well be that the ultimate structure of space is discrete, while the continuous representations that we make of it constitute perhaps a simplification (perhaps excessive, in the long run ...) of a more complex reality; That for the human mind, “the continuous” was easier to grasp than “the discontinuous”, and that it serves us, therefore, as an “approximation” to apprehend the discontinuous.

This is a remark of a surprising penetration in the mouth of a mathematician, at a time when the Euclidean model of physical space had never yet been questioned; in the strictly logical sense, it is rather the discontinuous which traditionally served as a mode of technical approach to the continuous.

Mathematical developments of recent decades have, moreover, shown a much more intimate symbiosis between continuous and discontinuous structures than was imagined, even in the first half of this century.

In any case finding a “satisfactory” model (or, if necessary, a set of such models, “satisfactorily connecting” to each other) of “continuous”, “discrete” or of “mixed” nature - such work will surely involve a great conceptual imagination, and a consummate flair for apprehending and unveiling new type mathematical structures.

This kind of imagination or “flair” seems rare to me, not only among physicists (where Einstein and Schrödinger seem to have been among the rare exceptions), but even among mathematicians (and here I speak with full knowledge).

To summarize I predict that the expected renewal (if it must yet come) will come from a mathematician in soul well informed about the great problems of physics, rather than from a physicist. But above all, it will take a man with “philosophical openness” to grasp the crux of the problem. This is by no means a technical one but rather a fundamental problem of natural philosophy.